Josh Hazlewood strengthened Australia‘s grip on the fourth Test at Old Trafford with a trio of England wickets late on Friday’s third day.

Fast bowler Hazlewood had so far taken 4-48 in 20 overs, with England needing a further 98 runs just to avoid the follow-on.

Ben Stokes, whose unbeaten century took England to a stunning one-wicket win in the third Test at Headingley, was seven not out and Jonny Bairstow two not out.

England were making steady progress during a third-wicket partnership of 141 between Rory Burns (81) and captain Joe Root (71). But Hazlewood removed both well-set batsmen before clean-bowling Jason Roy.

Victory in this match would see holders Australia retain the Ashes at 2-1 up with one to play in a five-Test series.

Rain meant there was no play before lunch on Friday. England resumed on 23-1, with left-handed opener Burns 15 not out and nightwatchman Craig Overton three not out after Cummins had dismissed makeshift opener Joe Denly on Thursday.

Overton had added just two to his score when he edged a full-length, rising delivery from Hazlewood to second slip, where Smith held a waist-high catch.

Burns, who scored a century in the first Test, cover-drove Mitchell Starc for a resounding four.

Burns’s back-foot drive for four off Starc, playing his first match of the series, and a steered boundary off the left-arm fast bowler saw him to a 100-ball fifty.

Root, who had his box snapped by a Starc delivery and was struck a painful blow on the leg by Cummins, should have been out on 54.

But an edge off Cummins went between Australia captain and wicketkeeper Tim Paine — who should have gone for the catch — and David Warner at first slip.

Paine, whose poor use of the review system contributed to Australia’s defeat at Headingley, wasted another challenge after Root was given not out in response to an lbw appeal from Cummins.

It prompted a huge cheer from a large crowd. They also took every opportunity to jeer Nathan Lyon, who had fumbled what would have been a match-winning run-out at Headingley, every time the spinner failed to take the ball cleanly.

Burns, in sight of what would have been a second Test century after his 133 in the series opener at Edgbaston, fell when he was undone by a fine Hazlewood ball that nipped away and took the edge, with Smith holding another sharp slip catch.

Hazlewood, demonstrating great control, then had Root lbw with a fine nip-back delivery to end a 168-ball innings, the skipper not even bothering to review umpire Kumar Dharmasena’s decision so certain was he of his own dismissal.

Roy, having struggled as a Test opener, had changed places with Denly but England’s use of a nightwatchman meant he came in at number five.

He got off the mark with a cover-driven four off Hazlewood but the paceman had the last word, clean bowling him middle stump for 22 with a superb delivery that moved late off the seam. 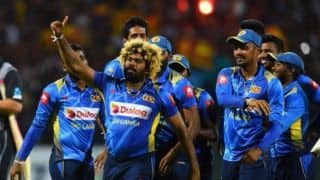 ‘A magician, a trailblazer of his time’- Tributes pour in for spin legend Abdul Qadir