Hazlewood picked 3/34 during Australia's tour match against Worcestershire, making a strong case for the Lord's Test.

Australia quick Josh Hazlewood is already relishing the idea of playing the second Ashes Test starting at Lord’s even though he hasn’t played Test cricket since January. Hazlewood picked 3/34 during Australia’s tour match against Worcestershire, making a strong case for the Lord’s Test starting August 14.

ALSO READ: Anderson not “giving up” on Ashes comeback

Hazlewood and Mitchell Starc were ignored for the Edgbaston Test which Australia clinched by 251 runs. Instead, Peter Siddle, James Pattinson and Pat Cummins led their pace attack and combined to claim 11 wickets. Hazlewood, hopeful of making it to the XI for the second Test, feels conditions at Lord’s will favour the pacers even more.

“I got enough out of this one innings, to be honest,” Hazlewood said. “Bowling exactly how I wanted, swung when I wanted, seam when I wanted.”It was just about bowling that right length and hitting it time and again, being patient and I was lucky enough to get the rewards pretty quickly early on then we had to fight for the last couple. I’m feeling really comfortable where I’m at, at the moment.

“I’ve just played the one Test there, but I thought I got used to the slope pretty quickly and felt pretty comfortable there. The conditions there have been quite bowler friendly the last few Test matches, so I’d love another opportunity. I was quite young, and quite inexperienced at that level when I first played a Test match and it probably passed me by pretty quickly. But just playing at Lord’s in an Ashes Test, it doesn’t really get much better so I’m looking forward to it.”

The idea of the ball swinging more at Lord’s might work better in favour of Australia and not so much for England considering the hosts will be without James Anderson. Hazlewood reckons England too might considering shuffling up their pace battery knowing in order to see the back of Steven Smith who has tormented them with twin centuries in the first Test.

“I think there’ll be a little bit more in it [at Lord’s], but in saying that, probably their best exponent Jimmy’s not going to play. So that might weigh up different options, but I think there’ll be more in it, maybe just to try to get Smithy out. But him batting on those sort of tracks is very hard work. I think it suits us as much as them if there is more in the wicket, so we’ll weigh it up,” he said.

Hazlewood, despite missing the first Test acknowledged the variety Australia possess in their pace line-up. Following a horses for courses approach, the fast bowler believes Australia’s firepower in the pace department allows them to keep all bases covered.

“If it’s a dry wicket where reverse swing might come into play, or it’s a very flat, then someone like Mitch Starc can come into play. If it’s nice and green and seaming around, then it’s myself and Sidds. I think they (the selectors) have definitely gone a different way to 2015 and I think that’s purely because of how tight the Tests are (scheduled),” Hazlewood pointed out.

“That’s why we’ve got six (quicks) here and any one can do a job on any given day. We’ve got three guys with proper air speed and three guys who seam and swing a little bit. I think that’s what they (selectors) have got six quicks for, to have all bases covered. And I guess it’s just who’s bowling best at that particular time leading into the Test, and who gets the nod. I think every quick really feels the pressure of the other five and vice versa, and it’s great competition to have in the squad.”

Hazlewood revealed he did not mind sitting out of the first Test, for the performances of those picked over him spoke for them.

“Sidds has obviously been playing a lot of cricket and I think the other guys picked themselves. Jimmy [Pattinson] has been bowling fantastic for Nottinghamshire and on the Australia A tour and in Southampton as well bowled incredibly. So it’s pretty stiff competition at the moment, and we’ve got Mitch Starc and Michael Neser as well. It’s a great group of guys, we all want everyone else to do really well as a group, and try and win the Ashes as a group of six not just us and them playing,” he said. 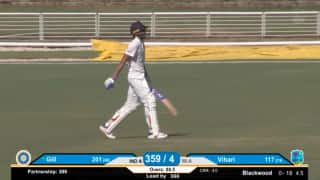