Langer terms the former captain as the "best problem-solver in the game," and at times, can give bowlers an unsolvable task to dismiss him.

Steve Smith couldn’t have asked for a better entry into the Test arena his two consecutive centuries in both innings paving the way for Australia‘s historic Ashes 2019 Test win against England, their first at Edgbaston since 2001.

Smith’s skills have been much talked about and coach Justin Langer knows it. In fact, he terms the former captain as the “best problem-solver in the game,” and at times, can give bowlers an unsolvable task to dismiss him.

Langer has been witness to the greatness of Virat Kohli over the Australian summer, but when asked to draw parallels, Langer pitted Smith a notch higher.

“I said during the summer that Virat Kohli is the best player I have ever seen but that [Smith’s knocks] is just another level,” Langer told ESPNCricinfo.

“I played with Allan Border and in my third Test he made his 10,123rd Test run [becoming the highest scorer of all time] and I wanted to be Allan Border. You have in different teams, different eras, great players but for someone like Smudge [Smith], who is averaging over 60 and the way he played in this innings with all the pressure and everything that is on him, it was not only great skill but enormous character, enormous courage, very brave, unbelievable concentration, unbelievable physical stamina, unbelievable mental stamina, all traits of great players.

“You throw to him in the nets and you literally feel like you can’t get him out and there’s no batsman like that and you just end up throwing a million balls and you are just lost for answers. I guess you would have to ask England how they feel about that and they had some interesting tactics for him. They had the really short point which I had never seen before, they obviously had a tactic they prepared and Trevor Bayliss has seen a lot of Steve Smith since he was a kid. They would have studied him closely but he just has a knack, well, he is the best problem-solver in the game.”

To think of Smith, who sauntered into the Australian dressing room back in 209 as a wrist-spinner and lower-order batsman, to making his way as one of the finest batsmen in the circuit is a story worth telling about.

“I’ve got a good story, but I’ll leave it for my book I think,” Langer joked about his first meeting with Smith.

“He’s under no instructions. He can hit as many balls as he wants. I don’t think he will because he won’t have anyone to throw them to him. Unless Dani (Willis, Smith’s wife) wants to put some in the bowling machine for him. She has done it before. He can prepare however he wants to prepare because we can have a theory on different players, but he’s just shown once again that he hits more balls.

“I said to Mark Ramprakash the other day, who used to hit more balls than anyone I’ve ever seen; Steve Smith hits double of what Mark Ramprakash used to hit. So, literally, he can prepare however he wants to prepare and we will keep encouraging that. But he’s going to be that tired after this game, physically and mentally, so I’m sure he’ll welcome the few days off.”

Coming to Nathan Lyon, who claimed 6 for 49 in the final innings, Langer admitted he never actually realised the offspinner’s full potential until he coached Australia.

“Like a few of our players, like Steve Smith, I didn’t realise how good Nathan Lyon was until I took over coaching the cricket team,” Langer said.

“You see him on telly, yeah Nathan Lyon, offspin bowler, but the last 12 months or so I just can’t believe how good a bowler he is. He’s a brilliant bowler, such good control: he spins, he gets some bounce, great fielder, really good in the team, he’s the song master, so that tells you something about his character. He’s a gun bowler. Three hundred and fifty wickets – that’s an incredible achievement, isn’t it?”

When the thought of Australia’s recent penchant for losing series after being 1-0 up, Langer doesn’t pay heed to such remarks.

“We talk about our values and you guys will probably start yawning when I say it but I say it very seriously,” Langer said.

“Humility is one thing, very important, professionalism, mateship, you’ll see plenty of mateship in the change room right now which is half the reason we play the game.

“[We] keep being honest about where we’re at; we’ve still only won one Test match. And we’ve got a captain [Tim Paine] who is that focused in there and he’s the best wicketkeeper in the world. You’ve just seen it. You’ve seen those catches today. He’s the best wicketkeeper in the world. I thought the way he batted in the first innings, he freed up and he’s worked really hard. He’s a brilliant leader, a great bowler and I thought tactically he was superb. He is so focused in this series, so there is no way he is going to let it slip and I guarantee you, I’m not going to let it slip either.” 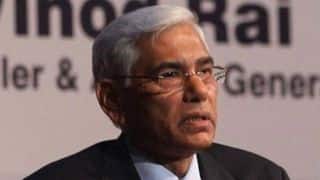