It was at Lord's that a 25-year-old Paine was presented his baggy green by the then captain Ricky Ponting in July 2010.

Nine years after he entered the Test cauldron as a young wicketkeeper, Tim Paine is back at Lord’s as the captain of Australia, leading them to a 1-0 lead in the Ashes series.

It was at Lord’s that a 25-year-old Paine was presented his baggy green by the then captain Ricky Ponting in July 2010. Now, he’s the captain and not many would have tipped him to the role given how his international career shaped up post his debut.

Paine wasn’t the only debutant from that Test at Lord’s against Pakistan in 2010. A certain Steve Smith had also been included as a legspinner, who batted at No.8 a rung below Paine himself.

Since then, Smith has risen to become arguably world’s best Test batsman and Australia captain before his reputation took a hit in the aftermath of the Newlands ball-tampering scandal in 2018.

At the same time, Paine fell off the radar after playing in just four Tests. He was recalled in 2017 for the home Ashes series before a fateful turn of events resulted in him becoming the Test captain.

“I probably know a few more things now than I did then (2010). I know one thing is that I certainly take it in a lot more now and enjoy what I’m doing. I think back then, I didn’t really. I put a hell of a lot of pressure on myself to perform, probably too much,” Paine told cricket.com.au.

Ahead of the Ashes 2019, Paine nonchalantly dismissed whether Australia were intimidated by the hostile atmosphere of Edgbaston. He had offered to list 15 venues that would make the cut, ahead of Edgbaston.

In that list, Lord’s certainly finds a place of honour. “As you walk up the stairs and you see all the legends on the wall, that’s intimidating,” Paine said. “But we are looking forward to another, hopefully, great atmosphere,”

He added, “I’ve been here a number of times since (2010), but I still remember coming through those gates the first time. It’s one of those grounds, you get a similar sort of feeling I reckon whether you’ve been here ten times, one hundred times or it’s your first time.”

The second Test starts from August 14. 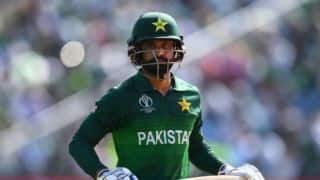