Australia were 155/5 at lunch on Saturday's fourth day, having lost just one wicket in the session.

Steve Smith continued to pile on the runs as Australia staunched the flow of wickets in the second Ashes 2019 Test against England at Lord’s on Saturday.

Australia were 155/5 at lunch on Saturday’s fourth day, having lost just one wicket in the session.

That still left Ashes-holders Australia, looking to win their first Test series away to England for 18 years, 103 runs behind the hosts’ first-innings 258. But with Smith’s 53 not out making him the first batsman to post seven consecutive Ashes scores of fifty or more, a match where rain washed out Wednesday’s first day completely and prevented any play after lunch on Friday looked to be heading towards a draw.

Australia captain Tim Paine was 21 not out, having helped Smith add 53 for the fifth wicket on a ground where they both made their Test debuts in 2010.

Australia resumed on 80/4 after England’s quicks had sparked a top-order collapse.

But star batsman Smith, fresh from twin hundreds in Australia’s 251-run win in the series opener at Edgbaston last week his first Test since completing a 12-month ban for his role in a ball-tampering scandal was 13 not out.

Meanwhile Matthew Wade, who also made a hundred at Edgbaston, was unbeaten on nought as the skies started to cloud over, with the floodlights switched on.

Smith, who before play told former Australia captain turned Channel Nine broadcaster Mark Taylor he had slept in the bathtub at the ground while it rained on Friday, produced some trademark extravagant leaves. But he also struck two stylish backfoot forcing shots for four off Stuart Broad.

Fast bowler Jofra Archer, fresh from taking his maiden Test wicket on Friday, came on in the fourth over.

It was Broad, leading the attack in the absence of the injured James Anderson, who broke through when he had Wade edging low to Rory Burns at third slip for an innings of six that took 45 balls.

Paine was beaten on the outside edge by the express pace of Archer and some fine deliveries from Chris Woakes. But when Woakes dropped short, Paine cut him for a well-struck four as the sun started to shine.

After 57 overs of right-arm pace bowling, England captain Joe Root finally brought on the recalled Jack Leach amid suggestions Smith could be vulnerable to left-arm spin.

Smith, however, completed his fifty when he went down the pitch to Leach and lofted him over long-on for a sixth four in 107 balls faced. 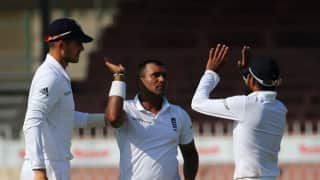