Smith's 92 was the centrepiece of Australia's 250 all out in reply to England's first innings 258.

Australia batsman Steve Smith just missed his third Ashes 2019 hundred in as many innings after returning following a sickening blow to the neck from a Jofra Archer bouncer on the fourth day of the second Test against England at Lord’s on Saturday.

Smith left the field during the day’s second session. He came back and was eventually out leg before wicket for 92, the first time this series he had failed to make three figures.

Smith’s 92 was the centrepiece of Australia’s 250 all out in reply to England’s first innings 258.

The star batsman was on 80 when he turned away from an express delivery from England fast bowler Archer timed at 92.4 mph. The ball struck him on the side of the neck and head.

Smith, fell face forward onto the ground. He was wearing a helmet without the additional neck protection that was introduced following the death of Phil Hughes after his former Australia team-mate died after being hit by a bouncer in a 2014 domestic Sheffield Shield match in Sydney.

Smith received several minutes of on-field treatment involving both Australian and English medical staff. He got to his feet but, after a prolonged conversation with Australia team doctor Richard Saw, decided to retire hurt.

Smith received a generous round of applause as he walked back into the pavilion.

ICC Cricket World Cup-winner Archer, making his Test debut, had previously struck Smith on his unprotected forearm with another bouncer during a fiery eight-over spell that cost 31 runs.

Smith resumed his innings as soon as he could. After 46 minutes off the field, he came back in when Peter Siddle was caught behind off Chris Woakes to leave Australia 218/7.

From the second and third balls he faced on his return, Smith hit two fours off Woakes: a slammed shot over mid-on followed by a backfoot drive through the covers.

But on 92, facing his ninth ball after resuming, Smith shouldered arms to a Woakes delivery that nipped back and was plumb lbw to leave Australia 234/8.

Smith turned towards the pavilion, signalling that he was reviewing umpire Chris Gaffaney’s decision almost as an after-thought.

Replays confirmed his dismissal, with Smith receiving more applause from the MCC members in the pavilion as he walked back in.

A Cricket Australia spokesman, explaining how Smith had been allowed to resume his innings, said: “Steve was hit on the neck below the left ear.

“He was assessed lying on the pitch at the instructions of team doctor Richard Saw. Dr Saw made the precautionary decision to remove Steve from the field of play to have him further assessed under Cricket Australia’s head impact protocol. Steve then passed his assessments and will now be monitored on an ongoing basis, as is routine.”

As for Smith’s arm injury, the spokesman added: “Prior to the blow to his neck, Steve suffered a bruised left arm. He was given a compression bandage on the field of play to reduce the swelling and he took a painkiller.

“The arm was then iced in the dressing room before he returned to bat following the blow to his neck. It ll be assessed on an ongoing basis.”

His half-century at Lord’s followed the 30-year-old Smith’s superb scores of 144 and 142 in Australia’s 251-run win in the series opener at Edgbaston last week his first Test since he completed a 12-month ban for his role in a ball-tampering scandal in South Africa that cost him the Australia captaincy. 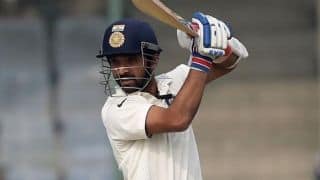