Need to bowl Australia out by lunch: Stuart Broad

Need to bowl Australia out by lunch: Stuart Broad

Stuart Broad feels that a result is still possible provided England are able to bowl Australia out by lunch.

Stuart Broad feels that a result is still possible in the ongoing second Ashes Test against Australia provided England are able to bowl the tourists out by lunch on Day 4 at Lord’s.

Just 24.1 overs of play was possible on Friday before rain wiped out the remainder of the day leaving England frustrated. It came as a relief to Australia who were left wobbling at 80/4, trailing the hosts by 178 runs.

With two days remaining, draw seems to be the most likely result but Broad is still positive as England hope to level the five-match series 1-1 after losing the opening Test at Edgbaston earlier this month.

“We’d have liked to continue because we put ourselves in a good position. It’s a real shame,” Broad said on Friday. “But we feel pretty positive. We’d need to bowl Australia out by lunch tomorrow.”

READ: Archer will take a bit of getting used to – Waugh

Throwing a bit of light on how England are likely to approach the ongoing contest given that rain has left little time to enforce a result for either of the two teams, Broad said, “There’s 98 overs for the next two days, which for both teams has been enough to bowl each other out. There’s certainly hope for both sides. There could be quite an interesting, intriguing game left in this Test match although we’ve lost so much for rain.

He continued, “Our bowling unit’s aim is to get the next six wickets by lunch and then ideally bat until an hour, or half an hour, before lunch on day five and try to force a result that way. This pitch has got 10 good balls in it in each day. Hopefully we’ll be bowling last, there’s a bit of dryness so [Jack] Leach could come into the game with good footholes there. I think we’ll get 98 overs in in the next two days, so I think there is chance of a result.”

Debutant fast bowler Jofra Archer has been impressive and got his maiden wicket at the Test level in Cameron Bancroft. In his 13 overs, Australia have managed just 18 runs apart from losing a wicket.

“I don’t think Jofra bowled as quick as he can out there. I was on the field with (Steve) Harmison a few times when it was genuinely like ‘Wow, this was express pace’. I think Mark Wood in St Lucia was theatre in cricket. Everyone on that field was blown away by the pace.

“I don’t think Jofra’s spell was necessarily like that but what impressed me was his nagging line. The fact he can bring all dismissals in, he’s aggressive with his bouncer and this is his first Test match. It’s a big learning experience and he seems willing and keen to learn,” Broad said. 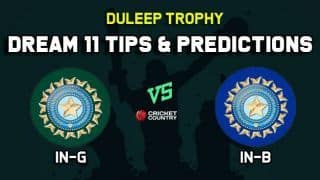