When the match should have been getting underway, the square and pitch remained fully covered and prospects of any play before lunch appeared slim.

Persistent early morning rain delayed the scheduled 11:00am (1000 GMT) start in the second Ashes 2019 Test between England and Australia at Lord’s on Wednesday.

When the match should have been getting underway, the square and pitch remained fully covered and prospects of any play before lunch appeared slim.

Ashes holders Australia lead the five-match series 1-0 after their 251-run win in the first Test at Edgbaston last week. It is 18 years since Australia last won an Ashes series in England.

England have only won seven Ashes campaigns from behind, most recently when they took the celebrated 2005 series 2-1. They were set to give a debut to fast bowler Jofra Archer after James Anderson, England’s all-time leading wicket-taker, was ruled out with a calf injury that meant he bowled just four overs at Edgbaston.

Neither England nor Australia had yet named their teams. They are not required to do so until the toss takes place.

Earlier, England captain Joe Root said he has no qualms about launching self-assured Archer’s Test cricket career in the cauldron at Lord’s. If selected, Archer will be making his Test debut on the ground where he bowled the decisive Super Over that sealed England’s ICC Cricket World Cup 2019 final win over New Zealand last month. 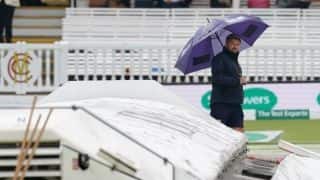