Boycott mentioned that if England are to prevent Roy from being axed, they must find a way to get him to bat some position else.

Jason Roy is just four Test innings old but unconvinced by his credentials to open the innings, former captain Geoffrey Boycott has suggested England that the 29-year-old be pushed down the order if he is to avoid getting dropped. Boycott s criticism of the batsman s inability to open the innings came after Roy played a careless shot in the second innings and was bowled by Nathan Lyon.

ALSO READ – Roy has got every chance to succeed in Tests: Matthew Hoggard

Following his debut Test against Ireland, where he scored 5 and 72, Roy managed to get just 38 runs across two innings at Edgbaston as Australia pummelled England by 251 runs to take a 1-0 lead. Boycott mentioned that if England are to prevent Roy from being axed, they must find a way to get him a spot somewhere in the middle.

“Jason Roy is the latest in a long list of openers tried since Andrew Strauss and if England do not move him down the order, he will go the same way as the rest and be dropped,” Boycott wrote for The Telegraph.

“In the second innings he played a brainless shot. He defended well, then suddenly jumped down the pitch to drive through the off side against the ball turning back at him and was bowled through the gate. I don’t think he has the mindset to defend and stay in over a long period.”

Roy was the star during England s victorious World Cup campaign scoring 443 runs in seven innings at an average of 63.28 and strike rate of 115.36 with one century and four fifties. His stellar run opened Test doors for him hoping England would be able to find suitable candidates at the top of the order since Alastair Cool and Andrew Strauss retired.

An aggressive and flamboyant batsman by nature, Roy was backed by batting coach Graham Thorpe and captain Joe Root to stick to his usual mode of batting, but the piece of advice did not sit well with Boycott.

“It did not help England’s batting cause when Graham Thorpe, the batting coach, said “play your normal game” because the normal game for Roy is to hit it, whack it and smack it. Thorpe is telling them to be positive, look to score runs,” Boycott pointed out.

“It is madness. In this situation of trying to save the match a quick fifty is not as good as staying in for three hours. I have seen enough of Roy as an opener to know that he has to bat down the order or not at all. That is where his stroke play has a chance of flourishing.” 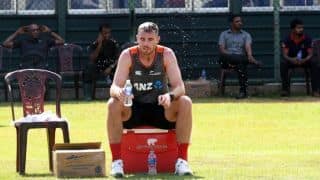