Steve Smith was in sight of a second century in his comeback Test after taking Australia into a significant lead in the Ashes opener at Edgbaston on Sunday. Australia were 231-4 in their second innings at lunch on the fourth day, 141 runs ahead.

Smith was 98 not out following a superb 144 in the first innings of this match — the former Australia captain’s first Test since a 12-month ban for his role in last year’s ball-tampering scandal in South Africa.

England, a bowler down in the absence of the injured James Anderson, took just one wicket in the session, with Travis Head out for 51 after sharing a fourth-wicket stand of 130 with Smith that saw Australia into a lead of more than a hundred runs.

Only three times have a side made more than 150 in the fourth innings to win a Test at Edgbaston, with the highest such total South Africa’s 283-5 in a five-wicket win 11 years ago — the last time England lost at the Birmingham ground.

The only other Australian to make as many as 800 runs in 10 successive innings against England is Don Bradman — widely regarded as Test cricket’s greatest batsman.

Australia, attempting to win their first Ashes series in England since 2001, were 90 runs behind on first innings in the match.

ALSO READ: Without Steve Smith, we would be in a bit of trouble: James Pattinson

They have not won an Ashes Test in Britain after conceding a first-innings lead since 1981 at Trent Bridge, where they were six runs behind before going on to prevail by four wickets.

Play began Sunday in overcast conditions with the floodlights switched on.

England were once more looking to Stuart Broad, who took 5-86 in the first innings, including his 450th Test wicket, to lead their attack in the absence of Anderson, their all-time leading Test wicket-taker.

Lancashire paceman Anderson only managed four overs in Australia’s first innings 284 before breaking down with a calf injury and team management confirmed Sunday he would not bowl in the second innings.

Smith, cleared of concussion after being hit on the head by a Ben Stokes bouncer on Saturday, completed a 69-ball fifty featuring just three fours on a slow pitch.

England off-spinner Moeen Ali — bowled for a duck by Australia counterpart Nathan Lyon — failed to provide captain Joe Root with control in the field as he went for more than four an over.

Left-hander Head went to fifty when he forced Stokes off the back foot through point for his sixth four in 111 balls faced.

But Stokes, trying to gee up the crowd, made the breakthrough England needed from around the wicket when he got the flat-footed Head to edge a cut, with wicketkeeper Jonny Bairstow holding a good low catch. 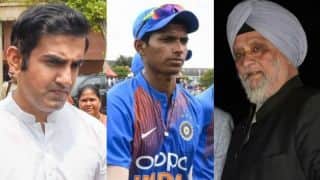 Navdeep Saini is outstanding but I don’t’ have to stoop to conquer like Gautam Gambhir: Bishan Singh Bedi 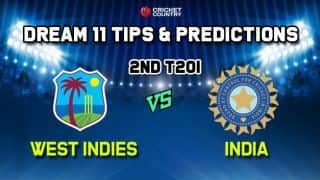