Smith followed up his first-innings 144 with 142 as Australia set England a target of 398.

Australia‘s Steve Smith insisted he had never lost faith in his ability as his “dream comeback” to Test cricket continued with a second hundred in the Ashes opener at Edgbaston.

Smith made 142 in Australia’s second innings 487/7 declared on Sunday after the star batsman’s 144 bailed them out to 284 following a collapse to 122-8 in their first innings.

With Matthew Wade making 110 on the fourth day as well, Australia set England an imposing target of 398.

Former Australia captain Smith and then deputy David Warner were both given 12-month bans for their roles in a ball-tampering scandal last year, with Cameron Bancroft — who actually applied sandpaper to the ball during a Test against South Africa in Cape Town — hit with a nine-month suspension by Cricket Australia.

All three batsmen are making their Test returns in this match, although Smith and Warner’s international comeback came during the World Cup, where Australia lost to eventual champions England in an Edgbaston semi-final last month.

“I’ve never doubted my ability,” Smith told reporters after stumps. “But, it’s kind of a dream comeback in a way. To be able to score two hundreds in a match, in the first Ashes match, it’s something I have never done in any form of cricket before in my life. It’s incredibly special.”

He added: “It feels like Christmas morning every morning getting to come and do this.”

Sunday was also memorable for Wade, once Australia’s wicketkeeper but now selected as a specialist batsman.

Wade, whose hundred was his first in Ashes cricket, had the best view at a packed Edgbaston while helping Smith add 126 for the fifth wicket, but said batting with him could be difficult.

“It’s daunting to be honest,” he explained. “Sometimes he makes it look way too easy and it hurts. He said to me the other day at breakfast he’d never scored a hundred in both innings of a Test match. When he said that, I thought we were going to be in for something special.”

England batting coach Graham Thorpe praised Smith’s two innings by saying: “In many ways you have to admire it and appreciate you are watching someone who is a fantastic player.”

England were without James Anderson for the whole of Australia’s second innings after their all-time leading Test wicket-taker remained sidelined with a calf injury that meant he bowled just four overs in the match.

Anderson missed last week’s Test win over Ireland with calf trouble but former England batsman Thorpe defended the decision to bring him back for this match.

“A guy who has played as many Test matches as he has, we have to trust his view,” he insisted.

England will resume Monday on 13-0, with Rory Burns, fresh from his maiden Test century in the first innings, and Jason Roy at the crease. Only one of England’s previous 33 home Tests has ended in a draw but Thorpe backed his side to bat out the day.

“We have got the character and the challenge is ahead of our guys tomorrow,” he said. “It will not be easy but this is Test cricket.” 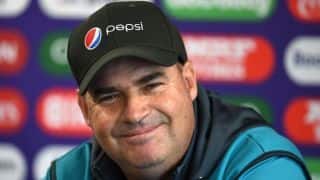