The point of impact with Smith's injury brought back memories of a fatal blow the late Hughes received on the same part of the neck nearly five years ago.

The sight of Steve Smith landing face first on the Lord’s pitch after he was felled by a Jofra Archer bouncer on Day 4 of the second Ashes 2019 Test sent goose bumps across the arena and those who watched the short clip that went viral on social media.

Smith, who was forced to retire hurt on 80*, admitted that he feared the worst as he crashed onto the pitch thinking of the tragedy that struck the late Phillip Hughes.

“When the doc asked me what did it feel like I said it felt like I had six beers last night and felt a little bit under the weather, without the six beers unfortunately. That was the sort of feeling I got, that groggy feeling and that stuck around for a couple of days. Not a nice place to be in but these things happen and unfortunately missed what was a pretty amazing Test match,” Smith, set to make a comeback in the fourth Test at Manchester, said about the sickening blow on Wednesday.

“I’m going well. Play the Derby game, get through that and pretty confident I’ll be right for the fourth Test match.”

Incidentally, the point of impact with Smith’s injury brought back memories of a fatal blow the late Hughes received on the same part of the neck nearly five years ago.

“I had a few things running through my head, particularly where I got hit, just a bit of past came up if you know what I mean from a few years ago. That was probably the first thing I thought about then I was like ‘I’m OK here’ and I was alright. I was a little bit sad, but I was alright mentally for the rest of that afternoon. I felt pretty good, passed all my tests and was able to go and bat and then it wasn’t until later that evening that it hit me,” he said.

There has been plenty of debate whether Smith should have returned to bat immediately after copping the blow. Even coach Justin Langer revealed that he asked Smith about his condition on multiple occasions before agreeing to let him go out again.

“That’s a difficult question because as we’ve seen this series there’s been so many head knocks already. Marnus Labuschagne has been hit a few times, Jos Buttler got hit at one point, Stokesy’s been hit. If you’re ruling people out from just hits every now and again, we won’t have a game,” he said.

“You’ve obviously got to take the advice of the doctor and how you’re feeling and at that point in time I was feeling fine. I wanted to go out like any other player would want to go out and try and help their team and you’ve got to take the advice of your medical staff. Had he told me that this isn’t the right thing to do then that’s fine, we cop that on the chin and you get on with things. But he was comfortable and I was comfortable and that was it, just move on and play.”

Another debate doing the rounds is whether Smiths refusal to wear add the stem guards to his helmet. Langer and captain Tim Paine said the former captain did not feel comfortable batting in them.

“I’ve tried them before, and I tried then the other day when I was batting and I reckon my heart rate went up about 30 or 40 straight away. I just feel claustrophobic. I compare it to being stuck in an MRI scan machine. It was different, but I think at some point they’re probably going to become mandatory so I’m going to have to get used to them. And I’m sure the more I wear them, the more I practice with them, my heart rate will come down and everything will be okay,” he said.

He reckoned that even the stem guard would not have saved him from being hit on the neck.

“Had I been wearing a stem guard in the game, I’m not sure that would have made a difference, the way my head sort of went back and where it hit me. Of course, you always want to have as much protection as possible and for me now it’s about trying it and trying to get used to it in the nets,” he said.

After having passed all the required tests to make his comeback at Derby, Smith is getting used to spending long hours in the nets.

“I did some running on the treadmill at about 11.5 km/h for four minutes, and was a little bit puffed after that. Then I did it the next day and was okay, so I progressed into some high-speed running and faced a few of the flickers, and then faced bowlers. So I’ve ticked all the boxes now, I feel good and I’m ready to play,” he said. 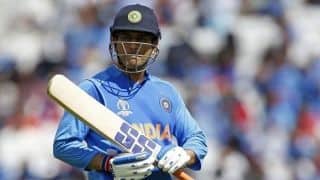