The move is being considered by the ICC to make identifying players on the field of play easier.

Test cricketers in the Ashes 2019 series are all set to have names and numbers on their shirts for the first time in 142 years of Test cricket. According to a report in The Guardian on Tuesday, the move is being considered by the ICC to make identifying players on the field of play easier.

The Ashes, which is the first to be played in the World Test Championship era, begins on August 1 in Edgbaston after the ICC World Cup 2019 in England. The hosts are aiming to win back the urn they lost in Australia in 2017-18. (ALSO READ: Australia to name Ashes squad ‘as late as possible’)

Test players have worn plain white or cream clothes since the first match in 1877, while the introduction of cap numbers and series details stitched in below the badge on their chest is a recent introduction.

In 2001, England were among the first to introduce a change by adding a number to the caps to denote where the player stands in the team s history. This move was then followed by other teams too. (ALSO READ: Durham unhappy as Bancroft set to miss County opener for awards dinner)

The move is likely to come into effect with the ICC keen to market and promote Test cricket the new Test championship, which has a showpiece final slated in 2021. 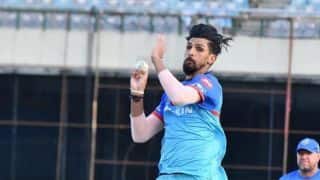