The 34-year-old was picked ahead of Mitchell Starc and Josh Hazlewood at Edgbaston.

He may not have picked up a wicket on Monday as Australia bowled out England for 146 to win the first Ashes Test by 251 runs, but recalled Peter Siddle has left a strong impression on the team management and looks set to retain his place for next week’s Lord’s Test.

Siddle, 34, was named in Australia’s XI for the Edgbaston Test ahead of Mitchell Starc and Josh Hazlewood. On day one, he scored a vital 44 while adding 88 for the ninth wicket with Steve Smith, and then took 2/52 from 27 overs as England were kept to 374 in their first innings.

After a second Smith century helped Australia set England a target of 398, Siddle was promoted from first change to open the bowling and sent down 12 wicketless overs for 28 runs. He saw one edge off Jason Roy’s bat fly past Tim Paine and another chance off Chris Woakes’ edge dropped by Smith at second slip.

Australia’s coach Justin Langer hailed the veteran pace bowler for his skill on day five at Edgbaston, having taken the decision to play him ahead of Starc and Hazlewood along with selector Trevor Hohns.

“The way ‘Sidds’ played in that practice game and the way he’s been bowling and the style of cricket we think we need to beat England,” Langer said. “It was a line-ball decision and it’s easy to say in hindsight but I thought Peter Siddle was almost the bowler of the game. He was brilliant. That was the best none-fa I’ve ever seen today.”

Siddle, Pat Cummins and James Pattinson – the trio of pace bowlers picked for the first Ashes Test – have been rested from this week’s three-day tour match between Australia and Worcestershire. Siddle has a fine county record to his name and hoped to call on that again at Lord’s.

“It is a place I love playing. My game, especially in the latter stages of my career, England is a place I’m suited to playing at,” he said on Wednesday. “Fast bowlers have had success there (at Lord’s), yes, but it shows at times that just being crafty, putting it in the right area, making the most of that slope whichever end you bowl from, you can have success.

“Glenn McGrath was the perfect example of that, he made the most of (the slope) and he had a dream run there in matches he played. Hopefully I can do a similar thing, play my part, build the pressure and take those wickets along the way and hopefully play a part in moving towards the end goal of a series win.” 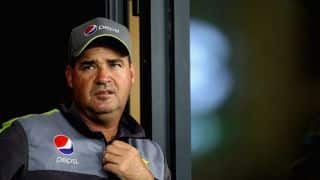