Ashes 2019: There's no better place than The Oval for David Warner to return to form: Justin Langer

Ashes 2019: There's no better place than The Oval for David Warner to return to form: Justin Langer

The Australian opener has been Stuart Broad's bunny, with the England pacer dismissing the Warner for six times in four Tests.

Australia coach Justin Langer on Wednesday threw his weight behind struggling David Warner. The left-hander has managed to score just 79 runs across eight innings and has been dismissed for three successive ducks in the ongoing Ashes.

The Australian opener has been Stuart Broad’s bunny, with the England pacer dismissing the Warner for six times in four Tests.

Langer admitted that the Australian opener, who returned to Test cricket following a one-year suspension in the wake of ball-tampering saga, did not have a great series but reiterated that if Warner has one good innings, Australia will win the series.

“Davey hasn’t had a great series, there’s no secrets about that. But he’s also a word-class player and I’ve said throughout the whole series, if Davey has one good innings it’ll help us win the Ashes,” Langer was quoted as saying by cricket.com.au on Wednesday.

“He probably hasn’t been through this lean run before, so it’s going to be a good test of his character. But he’s a match-winner and he’s been brilliant around the group since he’s been back (from suspension),” added Langer.

While Warner has managed to register only a single double-digit score in this Ashes – 61 in the first innings in the third Test at Leeds, Langer said that he is “looking forward” to see Warner among runs.

“He’s been great, good for the crowds, good amongst the group. He hasn’t got the runs he wants at the moment but jeez I’m looking forward to seeing it when he does, and there’s no better place in the world to bat than The Oval,” concluded Langer. 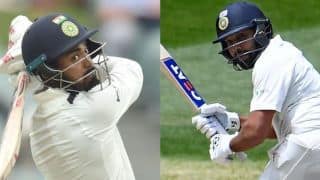