Smith, who has risen to number two in the world batting rankings, was pictured with his head in his hands and Langer looking glumly at the ground.

Australia‘s star batsman Steve Smith has been ruled out of the third Ashes 2019 Test beginning on Thursday after suffering concussion, a decision which coach Justin Langer said was a “no brainer”.

The 30-year-old Smith who has scored two centuries and 92 in his three innings in the first two Tests was felled by a Jofra Archer bouncer on Saturday in the first innings of the second Test at Lord’s.

Smith’s absence will be a huge blow to Australia who hold a 1-0 lead in the five Test series and for whom victory at Headingley would ensure they retained the Ashes.

Their other batsmen have not looked convincing experienced opener David Warner has totalled just 18 in his four innings with Smith being the lynch-pin.

“When we followed the protocols he was probably a couple of days off being fit to be selected,” said Langer at a press conference.

“It was really a no-brainer. He felt a bit better yesterday but he’s not going to have enough time to tick off everything he’s got to do.”

READ: ‘We re not here to see how many helmets we can hit’

Langer, who replaced Darren Lehmann as coach when the latter resigned following the ball-tampering scandal that blew up on the tour of South Africa in 2018, said losing Smith was as big a blow as England losing leading wicket taker Jimmy Anderson in the first Test.

“It is always a blow. No doubt about that. When you take your best players out it always has an impact.

“We have to make sure our senior players and the younger guys step up and fill what are almost unfillable shoes because he’s the best player in the world.”

The team doctor Richard Saw had the final say on whether Smith played or not and he was seen speaking with him during team training on Tuesday.

According to the Cricket Australia website, vice-captain Pat Cummins patted Smith on the shoulder and coach Justin Langer wrapped his arm round the former captain as the rest of the squad trained without him.

Smith, who has risen to number two in the world batting rankings, was pictured with his head in his hands and Langer looking glumly at the ground.

Smith, whose two centuries in the first Test were pivotal in Australia taking a 1-0 lead, returned to bat on Saturday despite the blow to the side of the head that felled him. He added 12 runs before being out.

However, he was unable to play on the fifth and final day on Sunday as he awoke feeling “groggy”. Australia held on to draw the Test with his concussion substitute Marnus Labuschagne playing a key innings.

The Ashes series is the first being played under the International Cricket Council’s new concussion substitute regulations, as part of the inaugural World Test Championship.

The regulations allow players who have suffered head or neck injuries to be replaced fully by a substitute, who was previously restricted to fielding alone.

During Saturday’s play Smith was wearing a helmet without the additional stem guard neck protection introduced following the death of his former Australia team-mate Phillip Hughes who was hit by a bouncer in a domestic Sheffield Shield match in Sydney in 2014.

Australia, bidding for their first Ashes campaign triumph on English soil in 18 years, lead the series thanks to a 251-run win at Edgbaston a fortnight ago.

In that match, Smith marked his first Test since completing a 12-month ban for his role in a ball-tampering scandal in South Africa with superb innings of 144 and 142.

Smith has two weeks to be ready for the fourth Test in Manchester, which starts on September 4, with a three-day tour match in Derby from August 29-31. 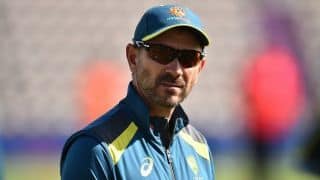 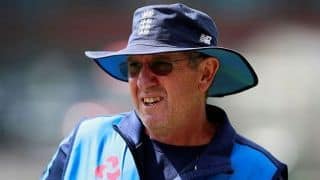