Ponting feels now is the right time for the Ashes holders to go full throttle and acquire back the lead in the series.

Having taken advantage late on Day 3, Ricky Ponting believes now is the right time for Australia to go all out against England in Manchester.

England fought back well through Joe Root and Rory Burns’ half-centuries but Josh Hazlewood‘s three-wicket burst kept the home team to 200 for 5, behind Australia by 297 runs and Ponting feels now is the right time for the Ashes holders to go full throttle and acquire back the lead in the series which the squandered after defeat in the previous Test at Leeds.

“Australia have to go all guns blazing to win this game, do everything they can to win this game and then worry about the recovery and turnaround for the next Test match,” Ponting told cricket.com.au. “Opportunities like this don’t come around all the time. “They let one slip in the last Test in Leeds, they’ve bounced back strong in this game so far and they’ve just got to go in for the kill now.

“A shortened day (on Friday) might help the bowlers recover but they’ve got to try and do everything they can to try and bowl Australia to victory in these next two days.”

While England have not found it easy against Australia’s fast bowlers, Ponting feels offspinner Nathan Lyon will be the key considering the way the wicket is playing. In Edgbaston, it was Lyon’s 6/49 which delivered a 251-run win for Australia, and the former skipper feels Lyon can produce another special performance over the weekend.

“As far as I’m concerned, Lyon 100 per cent holds the key to Australia winning the Test,” Ponting said. “The quicks have been outstanding and got all the wickets so far, but I have just got the feeling if Nathan gets it right, he’s going to be a real handful late in the game.

“He is getting a lot of turn and bounce and it’s not going to be an easy wicket for any batsman to start on because of that bounce and spin he is getting. Jack Leach (England’s left-arm spinner) will get it in the second innings too if Australia happen to bat again. There’s just been enough there to keep the bowlers in the game.”

Lyon seemed a bit off on Day 3 bowling 26 overs and going wicketless. As England rebuild through Root and Burns’ 141-run partnership for the third wicket, both batsmen played Lyon well, but now with Australia getting a sniff at the tail, Ponting has backed Lyon to pick himself up.

“If you think of Nathan through his career, it’s been his consistency and how often he hits the same spot (that has made him successful),” Ponting said. “And today and particularly to the left-hander Burns, he was really short, he (was) played of the back foot almost every ball.

“A bit the same with Root. You could see the way Root wants to play him, off the back foot when the ball is pitching just outside off stump and he looks to sweep him if it’s fuller and wider outside the off stump.

“So Lyon was just a little bit inconsistent, but it’s an unusual day for him so I’m sure he’ll bounce back late in this innings and in the second innings as well.” 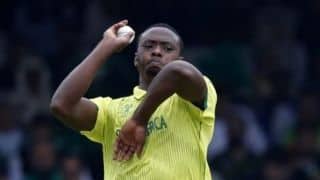