This will be only the third time the urn has travelled to Australia.

The Ashes urn will make its first journey to Australia in 12 years later this year when it is displayed in the State Library Victoria in Melbourne, Marylebone Cricket Club (MCC) announced Wednesday.

The urn, which traditionally resides in the MCC museum at its Lord’s ground headquarters, regardless of the result of an England-Australia Test series, will be on display in the Library’s ‘Velvet, Iron, Ashes’ exhibition from December 2019 until February 2020.

By then, the latest Ashes series between Test cricket’s oldest rivals will have been completed, with England staging a five-match series from August 1 to September 16 as they look to atone for a 4-0 away drubbing in 2017/18.

This will be only the third time the urn has travelled to Australia; it was exhibited for less than a week during the country’s 1988 Bicentennial celebrations and visited six cities in three months during the 2006/07 Ashes series.

England and Australia played what is now considered to be the first men’s cricket Test match at Melbourne in 1877.

The Ashes themselves came into being following England’s first home defeat by Australia at The Oval in London in 1882.

Afterwards, the Sporting Times newspaper published a mock obituary of English cricket that concluded by saying: “The body will be cremated and the ashes taken to Australia.”

On England’s next tour of Australia in 1882/83, a small terracotta urn said to contain the Ashes of a burnt bail was presented to visiting captain Ivo Bligh.

Following his death, the urn was bequeathed to the MCC and has remained the acknowledged symbol of Anglo-Australian cricket supremacy.

Since the 1998/99 series, however, the winning Ashes captain has been able to hold aloft a Waterford Crystal replica commissioned by the MCC.

“We are delighted to loan the Ashes Urn, a symbolic and special treasure, to State Library Victoria,” said MCC chief executive and secretary Guy Lavender in a statement.

“The story of the Ashes Urn is one that captivates so many people around the world and the State Library Victoria’s exhibition is a very fitting place for its story to be told.”

State Library Victoria chief executive Kate Torney added: “We are thrilled to have the chance to bring to life the wonderful stories surrounding the Ashes tradition, which of course, began here in Melbourne.” 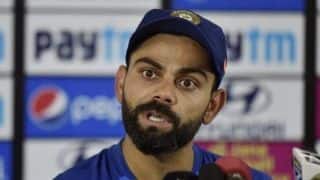