History was up for grabs in the India versus New Zealand T20I, the first of the three-match series, at Feroz Shah Kotla, Delhi. India were aiming for their first ever win against New Zealand in what was the former’s first match at the ground. However, majority were glued to their television sets or turned up in large numbers in the stadium, for one man Ashish Nehra. Nehra-ji was playing his last international match, and India honoured the occasion by producing their best performance ever against New Zealand in the format. Posting 202 for 3, they defended the score without sweating, winning by 53 runs. Nehra returned with 4-0-29-0 , but was all smiles in his post-match interaction with Sanjay Manjrekar.

“I will miss all this. That’s what you train for. Like I said earlier, one thing that will be in peace is my body. I really pushed myself. I could have pushed for another two months or years, but who knows you can’t get better and bigger than this retiring in blue clothes. It was the right time. I must be one bowler who bowled the most number of last overs for India, but it was different sort of pressure.

“Virat [Kohli] was on my case for the last 2-3 overs and I said I will bowl the last over. It is a big change and I have seen 18-19 years, I played my first game here in 1997 and there have been drastic changes. The rules have been changed and so many runs being scored. This is an amazing team and Indian cricket is in good hands for next 7-8 years. Every 8-10 years game changes and I don’t like to compare generations. Earlier we had superb players, [Sourav] Ganguly, MS [Dhoni] or Sachin [Tendulkar], I can’t name everybody. All in all it has been a great journey.

More than one performance I would say it’s the memory that matters more. In India people remember the memories more. I have told Viru [Sehwag] before: he has scored so many runs, but people remember him as Multan ka Sultan (for the Test triple-century at the ground). Maybe the Karachi last over. Or people may even remember Nehra for bowling the last over against South Africa in the World Cup [2011] and we lost. Many people asked me if you would have liked to play more Test cricket. But I think I am very fortunate to be standing here, retiring after 18 years, retiring in blue clothes in your home ground, I have no regrets. The crowd has been a great support. I am always happy whether I am retired or not.” 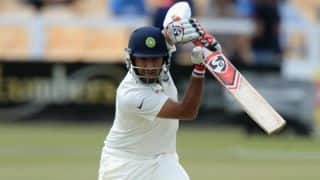