Ashish Nehra has joined the Royal Challengers Bangalore's [RCB] coaching leadership team and will partner South African Gary Kirsten who recently was appointed as the IPL franchise's mentor and coach.

Ashish Nehra has joined the Royal Challengers Bangalore’s [RCB] coaching leadership team and will partner South African Gary Kirsten who recently was appointed as the IPL franchise’s mentor and coach.

Nehra was the RCB bowling mentor during IPL 2018 when the team failed to enter the playoffs, finishing sixth in the points table.

“I had the privilege to join the coaching team of RCB last season and feel very passionately about the team,” Nehra was quoted as saying on RCB’s official website on Wednesday. “I want to thank the team management for considering me in a leadership position with the franchise and look forward for the successful seasons ahead.”

RCB chairman Sanjeev Churiwala expressed his delight at the news saying, “We are very happy to have Ashish Nehra join RCB as part of the coaching leadership team. Ashish and Gary will partner the Captain to help the team deliver better performance.” How well do you know The Oval? 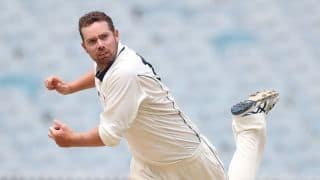