India lead the three-match T20I series against New Zealand by 1-0.

India had not won a single match against New Zealand in T20I history. The occasion was big. Ashish Nehra had finally decided to call it quits to his 19-year long career. Perhaps that brought the best out of hosts at Feroz Shah Kotla (Nehra-ji‘s home ground, too). India posted 202 for 3 and restricted the Black Caps to 149 for 8, winning by 53 runs. The stage was set by Shikhar Dhawan and Rohit Sharma’s identical scores of 80. They also registered the highest opening stand for India in T20Is. The head-to-head numbers between the sides still read 1-5, but India have at least found some impetus.

Black Caps were never in it

In pursuit of 203, Martin Guptill and Colin Munro had the opportunity to go bonkers from ball one. Nothing of that sort happened. Nehra commenced the innings and kept things tight. Yuzvendra Chahal bowled the second over, and Hardik Pandya produced a brilliant catch at long-off. Guptill (4) lofted one straight and Pandya timed his jump to perfection.

Virat Kohli rotated his pacers from thereon. Bhuvneshwar Kumar rattled Colin Munro’s stumps with a peach off a yorker. At 18 for 2, Kiwis knew they had to produce something spectacular to remain in the hunt.

It wasn’t going to be easy against six frontline bowlers. Only Kane Williamson (28), Tom Latham (39) and Mitchell Santner (27*) showed some spunk.

While every Indian bowler was among wickets, luck evaded Nehra in his final match. He mixed his lengths and bowled slower to deceive batsmen. He did everything right, but the fielders failed to hang onto their catches.

Pandya, after a splendid catch, couldn’t grab onto a tough chance off Munro albeit an extremely difficult one, for he was running backwards at serious pace.

Kohli almost pulled off a stunner at mid-off to try and get rid of Williamson. He leapt up in the air but only got his fingertips to it. Yet, luck did not shine on the veteran pacer. His wicket tally remained empty.

No wickets? No problem. Check out my football skills

How’s that for footy skills from our very own Nehraji? What do you make of that @YUVSTRONG12 😉 #INDvNZ pic.twitter.com/YaTeJk5d0t

The deal was sealed much before

Rohit wasn’t at his fluent best in the beginning. But Dhawan made light work of the New Zealand attack on his home ground.

Rohit stuck around and got runs. Dhawan timed his cuts, drives and slog sweeps to slam his highest T20I score. Nonetheless, Rohit did not falter. He upped the scoring rate after getting his eye-in. With New Zealand bowlers struggling to grip the ball because of dew, the openers created mayhem and took on Trent Boult, Tim Southee, Colin de Grandhomme and others.

Ish Sodhi and Santner applied the brakes by bowling slow. Santner remained wicketless, but Sodhi removed Dhawan and Pandya in the space of 3 balls. The finishing touch was provided by Kohli. He missed out on attaining a landmark, that of of becoming the second-highest T20I run-scorer but will fancy his chances in the upcoming games. He remained unbeaten on 26 and Dhoni smacked a huge six as well.

In the end, Nehra was given a lap of honour to end a memorable cricketing journey for Team India.

Player of the Match: Shikhar Dhawan. 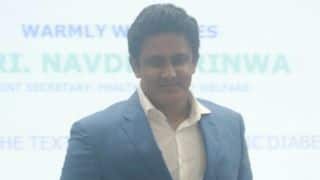 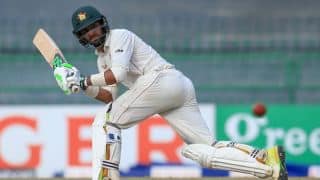