Rishabh Pant failed to impress in the recently concluded five-match T20I series against South Africa. He had a below-par Indian Premier League 2022 as well.

New Delhi: Rishabh Pant failed to impress in the recently concluded five-match T20I series against South Africa. He had a below-par Indian Premier League (IPL) 2022 and wasn’t able to revive his form in the last series. Pant’s bad form has also raised some speculations about his future in the team, while former Indian pacer Ashish Nehra has also suggested some valuable alternatives for the wicket-keeper batsman.

Pant, who got the captaincy of the team after KL Rahul got injured before the first T20I, just scored 57 runs against South Africa in the T20I series. Under skipper Pant, India lost the first two matches comprehensively but returned to winning ways in the third one.

The Indian players crushed the visiting side by 48 runs in the third T20I match at the Dr. Y.S. Rajasekhara Reddy Stadium on Tuesday and then won the fourth match at the Saurashtra Cricket Association Stadium in Rajkot by a massive 82 runs. However, Pant failed to contribute in any of the matches with his bat.

Ashish Nehra said to Cricbuzz, “The question this person asked was ‘can Team India play T20 cricket without Pant? Yes, Why Not. T20 World Cup is very far away. There is no stamp that says Pant will surely play the T20 World Cup. He can also get injured.”

“But there are a lot of games in between. We will have ten T20Is and then the Asia Cup. You have Ishan Kishan, and Sanju Samson. You also have Dinesh Karthik,” concluded Ashish Nehra.

Pant is the part of the Indian team that left for the United Kingdom to play a Test match against England. Apart from one Test match, the Indian cricket team will play three ODIs and as many T20Is against the home side. 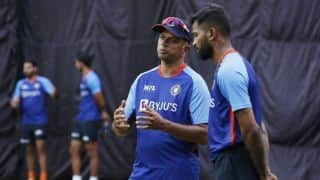