Ashish Nehra today said he would take a call on his cricketing future.

New Delhi: Ruling himself out of the four-day format, former India fast bowler Ashish Nehra today said he would take a call on his cricketing future in the next six to eight weeks.

“I am not playing four-day cricket but I am available to play T20 and one-day cricket for Delhi. I have not thought about playing for any other state till now although I have got 2-3 phone calls since I came back from England. I will take a call on my future on and off the field in the next six to eight weeks,” Nehra told PTI on the sidelines of the launch of ‘Ashish Nehra Cricket Academy’ at the Indus Valley Public School in Noida. Ishant Sharma playing 60 plus Tests is reward of his hard work, feels Ashish Nehra

On opening his academy, Nehra said he does not mind being a bowling coach as he is comfortable doing things out there on the field.

“I love speaking to youngsters and want to give back what I have learnt in the last 20 years. I am not a man who can sit in an air-conditioned room. I am an outdoor person and believe in practical work and not theories.” IPL 2015 proves that age is just a number

“If a young aspiring fast bowler comes upto me and asks me about swing bowling, I tell him, ‘First show me what you are capable of and then I will show you what needs to be done’,” said Nehra, whose 6/23 against England in a 2003 World Cup game in Durban is still a part of cricketing folklore.

Nehra also said that he is open to the bowling coach’s job even at U-16 and U-19 level. Ashish Nehra: I have been bowling well over the last few years

“Anything on the ground, I will never say no. So I am not saying no to bowling coach’s job whether it’s U-16, U-19 but let’s see how it pans out. I am still playing active cricket but I don’t know where I am going from here but this is certainly on my mind,” said Nehra.

Nehra also recalled an interaction with Glenn McGrath in England which prompted him to believe that one also learns a lot while coaching or mentoring fast bowlers.

“What I have learnt in the last four to five years, I didn’t learn in the first 10 years of my career. I remember meeting Glenn McGrath in England sometime back. McGrath was telling me, ‘Ashish what I learnt as a coach at MRF in the past 18 months, I haven’t learnt in the 15 year playing career’. Mohammed Shami eyes South Africa series for comeback

“Hope I had this knowledge when I was bowling. So I just joked and told Glenn that ‘what did you want’. To get 3000 Test wickets.” 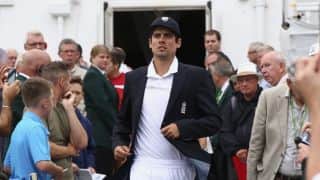