A month ago, Ashish Nehra had revealed that he will play his last international match at the age of 40.

A month ago, Ashish Nehra had revealed on Breakfast with Champions that he will play his last international match at the age of 40. Then, in an interview with ESPNcricinfo, he said, “I can play for another couple of years but it isn’t easy for a fast bowler at 38-39, especially considering the state of my body. But I am just trying my level best.”

Nehra turned 38 this year in April. This means he has at most 17 months of cricket left in him. However, he is often picked for the T20Is, where his body is not forced to bowl over 4 overs. He admittedly can manage that.

Nehra remained benched for the first two T20Is against Australia. On a green turf at Guwahati, India could have added him in the playing XI by keeping one of the spinners out, but Virat Kohli did not want to tinker with the winning combination. Whether India pick him up for the third and final T20I at Hyderabad, is a question only time can tell.

India then are scheduled to play a three-T20I series against New Zealand, starting November 1 good news for the Nehra-ji fans. But, if a report in Mumbai Mirror is to be believed, Nehra is planning to hang his boots after the New Zealand series. Nehra, however, has not revealed anything as of yet. In addition, he is not on social media. He moved on from Nokia E51 six months ago, so the announcement has to come via BCCI. Let’s hope we get so see Nehra playing in 2018 WT20, the time when he will almost turn 40.

“Yes, Ashish has told both Ravi and Virat that he does not want to continue beyond November 1 when India plays New Zealand at the Feroz Shah Kotla. Obviously, there is some element of surprise. One thought that he would like to continue till the home season against Sri Lanka. But he feels, it’s the right time to move on,” said a senior official in a report published by DNA. 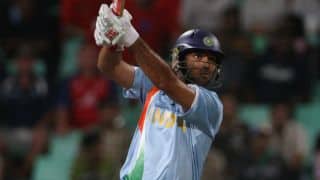