Nehra, while being critical of the incident, remained appreciative of Smith and Bancroft's acceptance of their mistake.

Reacting to the recent ball-tampering controversies in the ongoing South Africa-Australia Test series, former Indian pacer Ashish Nehra, while being critical of the incident, remained appreciative of Australian skipper Steve Smith and Cameron Bancroft‘s acceptance of their mistake.

“These kinds of incidents have happened even in the past. If the International Cricket Council (ICC) feels that Cameron Bancroft or Steve Smith have done something wrong, then definitely they should be penalised. If they have admitted their mistakes, then it’s a great thing from their sides,” said the Delhi-born former fast bowler.

Steve Smith was handed a one-match suspension and fined 100 percent of his match fee following the ball-tampering incident during the third day’s play against South Africa.

Additionally, Australia opener Cameron Bancroft has been fined 75 percent of his match fee and handed three demerit points for breaching Level 2 of the ICC Code of Conduct.

The incident took place during South Africa’s innings on Saturday afternoon when Bancroft was seen on television holding a small yellow object while rubbing the rough side of the ball, before hiding the object in his pocket, then inside his trousers. 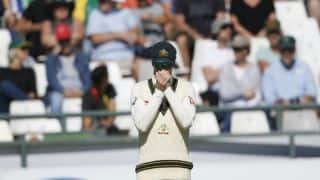