Ashley Giles, Makhaya Ntini and Heather Knight are among the 30 players to take the expedition.

When you’re climbing Africa’s tallest mountain to play the world’s highest game of cricket, you’d better make sure you’ve got a spare ball. England spin bowler Ashley Giles, along with 30 other trekkers including South African fast bowler icon Makhaya Ntini, have made sure they’ll be prepared by carrying up 24 balls — as well as pads, helmets, stumps and an entire plastic pitch.

“It’s a crazy challenge,” Giles told AFP, while trekking to the top of Kilimanjaro to play the game in its ice-covered crater, just below the 5,895 metre (19,341 feet) summit. If successful, the game in northern Tanzania will beat the current record by over 600 metres (1,968 feet).

Former England captain Nasser Hussain, in a message before the team set off Saturday on the trek, poked fun at old teammate Giles, warning “don’t forget to take some spare match balls, especially for when Gilo is bowling.”

Past high-altitude players say the balls fly in the thin air, where there is half the level of oxygen than at sea level. Alan Curr, who set the current record with a 2009 game played at 5,165 metres (16,945 feet) in the Himalayas at Everest base camp in Nepal, reported the ball speeding super fast.

“It goes miles… when it’s hit, it stays hit,” Curr said, speaking to AFP from Japan where he teaches cricket, reporting “some big sixes being hit”.

More seriously, the teams face the danger of acute mountain sickness — and deadly pulmonary or cerebral oedema — and are trekking slowly up the mountain’s flanks to ensure they acclimatise properly. Qualified umpires will ensure the game is played properly and is eligible to break the record.

Teams, who set off trekking on Saturday, aim to reach the peak at dawn on Friday. They then aim to play a full Twenty20 in the crater of the dormant volcano, laying down a plastic track for the wicket before playing in the freezing air, surrounded by vast blocks of ice. Giles said he was looking forward to testing his bowling in the dust and rocks.

Players are raising money including for cancer research and African wildlife conservation charity Tusk Trust. Funds raised will also go towards building Rwanda’s first international cricket pitch — with the game rapidly growing in popularity after being introduced by those who returned after fleeing genocide 20 years ago.

Three former England captains — David Gower, Nasser Hussain and Andrew Strauss — all offered their support, as well as England women’s captain Charlotte Edwards. “They must be daft, the lot of them! It’s taking cricket to ridiculous heights,” Gower said.

“Climbing up the highest mountain in Africa to set up stumps, unpack the cucumber sandwiches and play the highest ever game of cricket will be a truly remarkable achievement,” BBC cricket commentator Jonathan Agnew said. 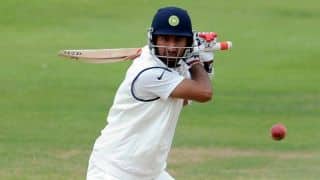