Medium pacer Ashok Dinda rocked the Delhi top-order before half-centuries from Shikhar Dhawan and Rajat Bhatia helped them reach 252 for eight after the first day's play in their Ranji Trophy Elite Group B match, on Tuesday. 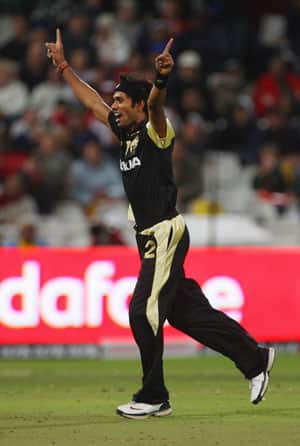 Medium pacer Ashok Dinda rocked the Delhi top-order before half-centuries from Shikhar Dhawan and Rajat Bhatia helped them reach 252 for eight after the first day’s play in their Ranji Trophy Elite Group B match, on Tuesday.

At stumps, Bhatia was batting on 59 along with Manoj Chauhan (6) with Dinda taking his wicket-tally of the season to 25 with figures of 4/55.

Left-arm spinner Iresh Saxena (2/37) had a fine second spell to help Bengal stage a comeback in the last session, breaking an 81-run sixth wicket partnership between Bhatia and Punit Bisht (40), the leading Delhi run-getter this season.

Delhi, who need an outright victory to have a chance of qualifying outright, were without their pace spearhead Ashish Nehra as the former India seamer decided to rest following back-to-back four day matches.

The match is equally crucial for Bengal who also need a victory to come out of the relegation zone.

Bengal (5 points) have one more match against Baroda, while for fourth-placed Delhi (10) this is their last league fixture.

Put into bat, Delhi had a jittery start when Dinda’s fiery first spell (8-4-11-2) in which he took two wickets in the 11th over reduced the visitors to 30 for two.

Debutant medium-pacer Veer Pratap Singh (1/49), drafted in place of veteran Ranadeb Bose, bowled with a lot of promise as he scalped skipper Mithun Manhas (18) with Delhi struggling for 60/3.

But India discard Dhawan (76 from 143 balls,10×4) remained vigilant at the crease as he along with Yogesh Nagar (30) put on crucial 69 runs for the fourth wicket.

Before the duo could put on a big partnership, Dinda gave another breakthrough in the eighth over after lunch when a fine low catch by Subhamoy Das at gully cut short Nagar’s innings.

Dhawan, was soon dismissed by Laxmi Ratan Shukla when the southpaw edged one to Arindam Das in the slips.

But a dogged innings from Bhatia tested Bengal’s patience as he along with Puneet Bisht added 81 crucial runs for the sixth wicket.

Just before Delhi could do a Tamil Nadu — when the latter recovered from 140/5 to 391 before humiliating Bengal by 10 wickets in the last match — left-arm spinner Saxena enticed Bisht with flight to give the breakthrough in the eighth over after tea.

The Delhi wicketkeeper batsman, fresh from an unbeaten 223 against Baroda, threw away his wicket when he stepped out but only to hit straight at mid-off.

Saxena (11-3-30-2) capped a fine second spell taking Pradeep Sangwan as Dinda took his fourth wicket in Kuldeep Rawat to help for a fightback by Bengal, desperate for a victory to escape relegation.

Delhi had to make three changes to their line-up as Kuldeep Rawat came in place of Nehra, while Anukur Julka replaced Milind Kumar and offie Manoj Chauhan was brought in place of an indisposed Vikas Mishra.

A DDCA official said he was unaware of Nehra’s unavailability.

“Nehra informed the skipper last night that he would not be available for the match as we had to go with the other medium pacer,” he said. (PTI)