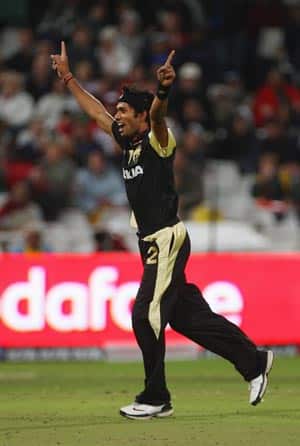 Needing only 34 to win, all Arindam and other opener Shreevats Goswami needed to do was score the runs without getting out. It would have meant 14 points and a better run-rate than Haryana would have ensured a safe passage into the knock-out stage.

Starting the day at 103 for five, Dinda and Sarkar demolished the Baroda lower-order to dismiss hosts for 139 leaving a target of 34.

However Arindam, a veteran of 70 first-class matches didn’t display the temperament expected from someone who has played 10 years of first-class cricket. Rather than playing positively, Das (9) was in his shell from the word go and was pushing and prodding away. A Gagandeep Singh Natt delivery that was angled was nicked to Pinal Shah behind the stumps.

Arindam and the Bengal team management later claimed that the opener didn’t nick the ball but it was more to do with disappointment knowing fully well that their opening pair which has flopped throughout the season couldn’t pull through one final time when the team needed them to deliver.

The positives for Bengal this season has obviously been the performances of Dinda who took 37 wickets in six matches and Manoj Tiwary who scored 591 runs in four matches.

Even Sourav Ganguly, who is a few months short of his 40th birthday also scored 424 runs and got a few wickets. But the lack of bench strength has been the team’s undoing.

“I am happy that I have been able to perform well this season. The ambition is to play for India for a long time but my job is to perform,” Dinda said after the match. (PTI)