Ashwin scores maiden ton as India are bowled out for 482

Ashwin scores maiden ton as India are bowled out for 482

Off-spinner Ravichandran Ashwin turned out to be the surprise package, scoring his maiden Test century to go with his five-wicket haul in the first innings as India were all out for 482 at tea on the fourth day of the third cricket Test against West Indies here Friday. 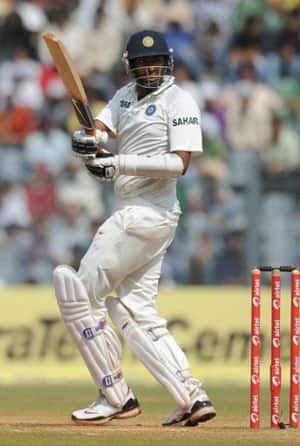 Off-spinner Ravichandran Ashwin turned out to be the surprise package, scoring his maiden Test century to go with his five-wicket haul in the first innings as India were all out for 482 at tea on the fourth day of the third cricket Test against West Indies here Friday.

Ashwin, playing only his third Test and coming into bat at No.8, enthralled the crowd who were disappointed with Sachin Tendulkar falling six short of his 100th international century in the morning.

The tall spinner, who took five for 61, played elegantly for his 103, striking 15 fours and a six.

He joins the elite league of Vinoo Mankad and Polly Umrigar as the only Indians to score a century and take five wickets in an innings.

He reached his century steering the ball between slip and gully of Ravi Rampaul with the crowd on their feet. Pragya Ojha played his part in blocking 14 balls, including a over from Fidel Edwards (1-116), that allowed Ashwin to complete his century.

The morning was all about Tendulkar reaching the three-figure mark that has eluded him since eight months.

But Tendulkar fell six runs short of his milestone century.

Tendulkar, resuming at overnight 67, came out aggressively and looked set to achieve his 100th century. But the ton eluded him as he was out to Rampaul, caught in second slip by West Indies captain Darren Sammy. A hush descended over the stadium as Tendulkar walked off the field looking toward the sky.

The stage was perfectly set for the maestro and he showed the intent.

Though West Indies began the day well with Ravi Rampaul testing Tendulkar with a bouncer and Fidel Edwards striking with his first delivery of the day getting rid of V.V.S. Laxman at gully.

But Tendulkar was at his very best. He raced to the nineties with three fours and one six. A straight drive and an elegant punch past cover saw the ball screaming to the boundary all along the ground. An upper cut off Fidel Edwards carried the ball over the ropes.

While looking to complete his century in the same fashion, Tendulkar edged Rampaul as he tried to guide the ball over the slip cordon, but could not get past captain Darren Sammy at second slip. The crowd was shocked to see him walk back.

He scored 27 runs in 20 balls in the morning, his 94 coming in 153 balls laced with eight fours and two sixes.

Sammy, who has been bowling intelligently maintaining a steady line, was rewarded with Mahendra Singh Dhoni’s wicket. The wicketkeeper batsman played over a fullish delivery and had his stumps shattered.

It fell to Kohli and Aswhin to save the team from following on.(IANS)

Jayasuriya urges fans to have faith in Sri Lankan team