Dinesh Karthik is banking on his experience to come through in the Asia Cup.

Pressed into service after injury to Mahendra Singh Dhoni, wicketkeeper-batsman Dinesh Karthik said being an “outsider”, he can add a bit of freshness to India‘s Asia Cup 2014 campaign after the battering in recent international engagements.

India will start their Asia Cup campaign with a match against Bangladesh. Karthik, who was not a part of the squad which went winless in the recent tours of South Africa and New Zealand, said he is not scarred by the disastrous results.

“I got to know about three-four days back, I guess I’m used to it now being called so many times. It doesn’t play on my mind too much,” Karthik said after the team’s practice at the Sher-e-Bangla National Cricket Stadium.

“For me it’s about coming out here… It’s important to get into the zone just before the game. Obviously as a player I’m very excited to be a part of this Indian cricket team.

It’s one of the best teams available. For me, it’s an honour to represent India and do the best that I can,” he added.

Asked about India’s prolonged winless patch with the last coming in against visiting West Indies in November last year, a nonchalant Karthik said: “Actually, you should have asked this question to somebody who was a part of these eight ODIs.”

“From an outsider point of view, I’m coming into this team fresh. As an individual I can talk of my perspective and say that for me it’s going to be exciting. I’m sure it’s the same for all the players. But somebody who has played those eight games will answer this question much better.”

Karthik went on to add that the team has an exciting bunch of youngsters who would be keen to do well.

“Definitely, it’s a big tournament for all of us. It’s going to be exciting for all the young players in the team, so we all are really looking forward to it.”

The Indian team might not have the experience of Yuvraj Singh and Suresh Raina but Karthik said there are other players who have been around for quite a long time.

“I’ve been around scene for some time. Given the opportunity, I will try and use whatever little experience I’ve had and bat to the best of my ability.

“Having said that, quite a few guys have played 100 games which is a lot of experience now. They have been playing now for a year or two. They have been given a good run.

“Obviously everybody will pull in their experience whatever little that we have, go out there and give it our best shot,” he added. 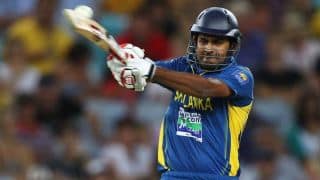