Anamul Haque has been aggressive against Varun Aaron in particular.

After getting off to a rather quite start off the the first 10 overs, Bangladesh have slightly upped their scoring rate to stand at 96 for the loss of two wickets at the end of 20 overs.

After Bhuvneshwar Kumar and Mohammed Shami got India off to a good start by not letting the Bangladeshi batsmen to free their arms, Anamul Haque and Mushfiqur Rahim have looked slightly more confident against the likes of Ravichandran Ashwin and Varun Aaron.4

Bangladesh lost their second wicket in the form of Mominul Haque in Ashwin’s very first over, as Mominul was stumped by Dinesh Karthik. While Ashwin has managed to carry on the good work of Bhuvneshwar and Shami, Aaron has proved to be slightly on the expensive side. He was hit for two boundaries (9 runs in total) off his first over by Anamul, and then in his third over, he was hit for a huge six over long on. He again hit for a six in the 20th over.

Bangladesh, on the other hand, will be looking for a big partnership from the two men in the middle, in order to hold a good chance of putting up a big total on board at the end of the innings. 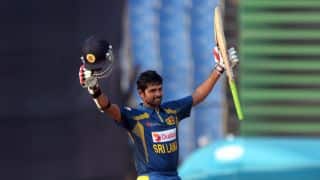 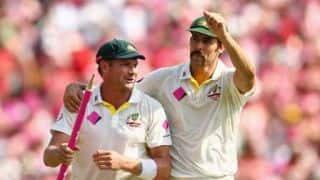