India have allowed Bangladesh just 36 off the first 10 overs.

After winning the toss in first match of his biggest tournament as a captain till date, Virat Kohli decided to bowl first against Bangladesh in the second match of Asia Cup 2014 at Fatullah, and his bowlers responded by starting off in a very economic fashion, with the hosts managing  36 for the loss of one wicket after 10 overs.

With three seamers in the form of Bhuvnshwar Kumar, Mohammed Shami and Varun Aaron forming the pace attack along with Ravichandran Ashwin and Ravindra Jadeja in the spin department, India will look to hold down Bangladesh to anything below 280-290.

Buvneshwar and Shami started off the innings well for India as they maintained a stringent line and length against Bangladeshi openers, allowing just 16 off the first five overs, and Shami also got the wicket of Shamsur Rahman (7 off 12 balls) in the sixth over, as the Bangladeshi opener got a top edge which was held on to by Shami after avoiding a collision with Ambati Rayudu, who too was coming in for the catch.

Bhuvneshwar kept things really tight in the first 10 overs as he has conceded just 22 runs from his five overs along with a maiden, but Shami has looked the more likely to take a wicket of the two so far. 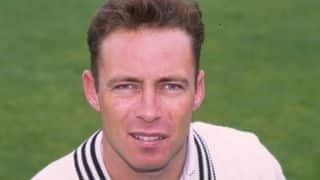