Pandya, who stroked a quick-fire 18-ball 31 in India's win in the Asia Cup opener against Bangladesh last night, said hitting sixes has always given him joy and his natural instinct to smack the ball hard.

Mirpur: Whacking the ball hard and far is his natural style but fast-rising Indian all-rounder Hardik Pandya insists he is a proper batsman and not merely a pinch- hitter. Pandya has won quite a few admirers, including Mahendra Singh Dhoni, with his aggressive style of batting which the Indian captain says is a big advantage for India in the T20 format. “This is my style of play and this is how I have been playing my cricket. I have never been sent in by the team as a pinch-hitter. I believe I am a proper batsman. That is why I am not told by anyone to bat in a particular way. It is a good thing that I am able to score at that pace which is something that the team requires from me,” Pandya was quoted as saying by ‘bcci.tv’. FULL CRICKET SCORECARD: India vs Bangladesh, Asia Cup T20 2016, Match 1 at Dhaka

Pandya, who stroked a quick-fire 18-ball 31 in India’s win in the Asia Cup opener against Bangladesh last night, said hitting sixes has always given him joy and his natural instinct to smack the ball hard. “I don’t really know how and where I got my big hitting capabilities from. But, right from my childhood days, it was a habit for me to hit big sixes. I always had this urge to send the ball out of the boundary be it any tournament.

“Even when I was 16 or 17 and finding my way into competitive cricket, hitting sixes was something that I always wanted to do. Even at that age, I would back myself and follow my instincts. If I would feel that I have to hit the first ball for a six, I would go for it. That is the way I have played and that is the way I play even now. Sometimes it works and sometimes it doesn’t, but that is the way it goes.”

Pandya said he discovered his aggressive strokeplay during his stint in the domestic circuit. “That was the phase when I got to know about my shots, my strengths. The shots that I am comfortable and uncomfortable playing and the shots that I can bank on to get runs. I got clear in my mind about such small things and I slated a few shots that could prove handy if and when I played international cricket. I am just following those things and hopefully it continues to work for me.” READ: Ashish Nehra, Rohit Sharma star as India thrash Bangladesh by 45 runs in Asia Cup T20 2016 opener

Pandya said he has no role models but he does admire the big-hitters like South African AB de Villiers and his captain Dhoni. “I have never had a role model when it comes to hitting sixes but I just look at great players like our captain MS Dhoni and AB de Villiers and other big hitters in the world. I would want to get the consistency that these two players have.

“I love the way Dhoni maintains his posture while going for those big shots and it is something I would want to learn from him. His positions are rock solid and his hands move swiftly when it comes to executing power hitting. Hopefully I can take such skills and imbibe them in my game and I could become a better player.” 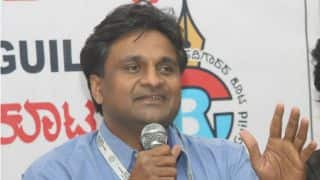