Ashwin bagged Perera's wicket as Dhoni stumped him but the umpire did not went upstairs for the confirmation and declared the batsman out while it was later revealed by the replay that Perera remained unlucky at that occasion.

Fans getting emotional on twitter is a regular affair. But getting trolled back by a player is what you see rarely. A twitter battle between Ravichandran Ashwin and a Sri Lankan cricket fan broke out when Thisara Perera was sent back to the pavilion with stumping by MS Dhoni bowled by Ashwin. The replay showed that the batsman was not out leading to a tweet by a cricket fan saying @ashwin99 it s been given out, whr is @ICC now? still in dubai? or at mirpur? to which Indian off-spinner replied, naughty boy, ICC will always remain in Dubai, unless you fund them an office in Mirpur. Good try anyways . Full Cricket Scorecard: India vs Sri Lanka, Asia Cup, Match 7, at Mirpur, Dhaka

After acknowledgement by Indian off spinner Ashwin, the fan showed his disappointment with another tweet saying But still, u knw it was not out. U cud hav call @thisara back.. U knw its a gentleman s game. which backfired soon with yet another witty reply by Ashwin fortunate that i have tunnel vision instead of 3D vision . Here is the tweet:

@ashwinravi99 its been given out, whr is @ICC now? Stil in dubai? Or at mirpur?? pic.twitter.com/3LmcdvlMlZ

Humor apart it was crucial and had Thisara Perera been given not out, there might have been a difference of 10 to 15 runs playing a crucial role in end stages of the game. But after all, cricket is not a game of ifs and buts.

India defeated Sri Lanka in their third match of Asia Cup 2016 campaign. The Lankans had posted 138 batting first which was easily chased down as Virat Kohli and Yuvraj Singh got into the action building a 51 run partnership. Earlier during Sri Lanka’s innings, Ashwin bagged Perera’s wicket as Dhoni stumped him but the umpire did not went upstairs for the confirmation and declared the batsman out while it was later revealed by the replay that Perera remained unlucky at that occasion. 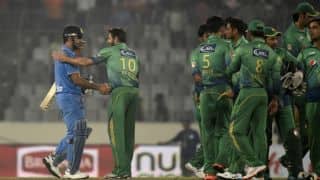