Asia Cup 2018: Bangladesh and Pakistan clash for a spot in final

Asia Cup 2018: Bangladesh and Pakistan clash for a spot in final

Both sides have lost one match each, against India, in the Super Four stages which increases the stakes at this clash, a virtual semi-final.

The heavy back-to-back defeats against India notwithstanding, Pakistan have one last shot to seal their place in the final of the 2018 Asia Cup when they face Bangladesh in the last Super Four match at the Sheikh Zayed Stadium in Abu Dhabi on Wednesday.

Both sides have lost one match each, against India, in the Super Four stages which increases the stakes at this clash, essentially a semi-final.

Bangladesh suffered a seven-wicket loss to India in their first Super Four game, but somehow managed to scrape their way through against Afghanistan during a tense last-over win two days later.

Pakistan were made to toil hard for their first Super Four match against a feisty Afghanistan side, but thanks to Shoaib Maliks s unbeaten 51, the 2014 champions were able to walk away with a slim three-wicket win. Against their arch-foes India, Pakistan posed hardly any threat to the mighty Indian batting line-up that saw openers Shikhar Dhawan and skipper Rohit Sharma slam a match-winning 210-run partnership. Although Dhawan was run out, which could have been the only way to break the partnership, the Pakistan bowling department was pretty ordinary.

Pakistan and Bangladesh will want to forget their past results and bring out the best in them for this do-or-die encounter.

Weather: Mostly sunny with a high of 37 degrees

Pakistan will have to fine tune themselves in batting and bowling. As far as batting is concerned, both openers, Imam-ul-Haq and Fakhar Zaman have failed to fire in unison. Pakistan have heavily relied on veteran allrounder Malik, who not just took them over the line against Afghanistan, but also helped his side to a respectable total against India.

Pakistan s biggest concern however, would be the poor form of pace spearhead Mohammed Amir, who is yet to pick a wicket in this tournament. It will be a tough call by the think tank to leave out Amir for the more economical left-arm pacer Usman Khan, but it is highly unlikely that the eleven that faced India will be changed.

With scores of 6, 7 and 7, Bangladesh opener Nazmul Hossain Shanto s form is a major concern. If Bangladesh need to get off to a flyer, then Shanto has to bring his A game to the fore. While the batting failed against India, a top order collapse against Afghanistan meant experienced Mahmudullah and Imrul Kayes had to resurrect the innings. Bangladesh will look to go ahead with the same eleven that defeat Afghanistan and fancy their chances against Pakistan.

There are areas we can still improve on. Our middl order is fine, the top-order needs to click. Pressure will always be there. We just need to find out ways to handle it, that’s all.” – Mahmudullah 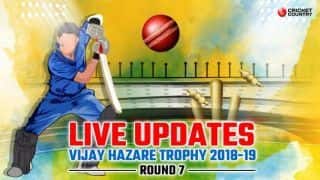