Afghanistan won the toss and opted to bat against Bangladesh in the sixth and final league match of the Asia Cup 2018 at the Sheikh Zayed Stadium on Thursday.

Both the teams have already made it to the Super Fours after Sri Lanka were eliminated from Group B on account of having lost both their matches. Bangladesh, who play India tomorrow, have made three changes to their playing XI – Tamim Iqbal (injured), Mushfiqur Rahim and Mustafizur Rahman (both rested). They have given ODI debuts to Abu Hider Rony and Nazmul Hossain Shanto while Mominul Haque will play his ODI since the 2015 World Cup.

Afghanistan, on the other hand, have just made one change from the XI that thrashed Sri Lanka – Najibullah Zadran has been replaced by Samiullah Shenwari.

Afghanistan captain Afghar Afghan expects the pitch to assist batsmen and hopes to put up a challenging total. “I think it will be a good batting track and we are looking at a score around 250,” he said at the toss.

Bangladesh skipper Mashrafe Mortaza also would have batted first and hopes to keep Afghanistan to a low total. ” [This] looks to be a good wicket to bat on and hopefully it will get better. We have to restrict them to a low total and build pressure on them. Our batters have to step up because they are experienced,” he said. 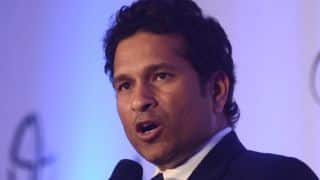 Sachin Tendulkar turns down honorary degree due to ethical reasons