Afghanistan enter the Super Four of the 2018 Asia Cup on the back two stellar performances that has seen them dismantle Sri Lanka and Bangladesh, by 91 and 136 runs respectively, and this turns their clash with Pakistan on Friday in Abu Dhabu into an even more engaging contest.

While Hong Kong proved to be easy pushovers for Pakistan, they were humbled by India in a defeat which left skipper Sarfraz Ahmed frustrated at the batting. Losing wickets to India’s part-time spin bowler Kedar Jadhav hurt Pakistan, and a repeat against a superb slow-bowling attack at the Sheikh Zayed Stadium could spell doom for them.

Indeed, the Rashid Khan-led spin attack consisting Mujeeb ur Rahman and Mohammad Nabi pose the biggest threat for Pakistan, whose middle order was exposed by India in the league stage. However, despite the marauding form of Afghanistan s bowlers, their batting still has weak links and that is where Pakistan have the opportunity to prove why they are the No.5 ranked team in ODIs.

While Pakistan had a day s rest after their last Group A match, Afghanistan will be playing their second match in 24 hours but considering they really didn t break a sweat in defeating Bangladesh, fatigue will not be an issue.

Weather: Mostly sunny with a high of 36 degrees

With spinner Shadab Khan limping off during the India match, he is unlikely to be fit. Mohammad Nawaz, the only other genuine spinner in the squad, is likely to take his place. Mohammad Amir s lack of form was a concern for Pakistan ahead of the India clash and continues to be so after he went wicketless. That may prompt the management to hand ODI debut to 18-year-old left-arm quick Shaheen Afridi or they may go back to the experienced Junaid Khan. Despite the middle-order collapse, it is unlikely that Pakistan will make a change in batting.

Why change the winning combination? There is no doubt that Afghanistan will play the same bowling attack that ran roughshod over Sri Lanka and Bangladesh. The batting has been vulnerable but the line-up has managed to post winning totals of 249 (vs Sri Lanka) and 255 (vs Bangladesh) – and they have the best team aggregate in the tournament. Skipper Asghar Afghan had some groin trouble against Bangladesh and that could mean Rashid taking over the captaincy duties with the addition of Najibullah Zadran in the middle order.

Against Afghanistan in the Asia Cup, Pakistan have played one match and won by 72 runs in 2014.

“We want to win, show our abilities and talent. When you want to play cricket just for winning, shows positive intent” – Asghar Afghan

“Of course there is [pressure on Amir]. I’d be lying if I sat here and said there wasn’t. I had a really good, long, hard chat with him last night and I thought he came out and bowled really well today” – Mickey Arthur 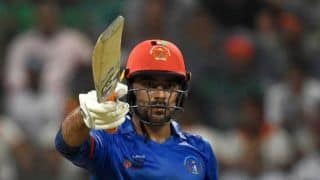 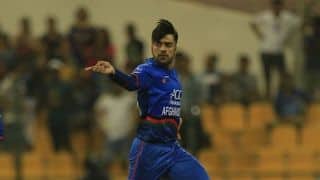