Looking at the bigger picture i.e. 2019 World Cup, Agarkar said the injuries presented a golden opportunity for the selectors to test the limited-overs credentials of Krunal Pandya.

Former India bowler Ajit Agarkar isn’t impressed with the BCCI selectors recalling allrounder Ravindra Jadeja as one of the replacements in the injury-struck India squad in UAE for the ongoing Asia Cup 2018.

Injuries to Hardik Pandya, Axar Patel and Shardul Thakur forced the selectors to name three replacements for the trio. Consequently, Deepak Chahar, Ravindra Jadeja and Siddarth Kaul will fly to UAE to link up with India s ODI squad for the Super Four stage.

However, Agarkar, who played 191 ODIs between 1998 and 2007, isn’t entirely convinced with the replacements, especially that of Jadeja.

“Strange couple of those changes,” Agarkar told ESPNcricinfo on Thursday. “I can’t understand the selection of Ravindra Jadeja. It was a nice opportunity for the selectors to bring someone like Krunal Pandya. He seems to be doing ok in List A cricket.”

Krunal, currently representing Baroda in the ongoing Vijay Hazare Trophy, scored 85 and took 1/24 against Mumbai in the first match. Then on Thursday, he put up yet another decent performance with an unbeaten 34.

Looking at the bigger picture i.e. 2019 World Cup, Agarkar said the injuries presented a golden opportunity for the selectors to test the limited-overs credentials of Krunal who averages 35.90 with the bat in List A cricket.

“A missed opportunity for the selectors to see if Krunal has what it takes. Time is running out now to see players before you freeze down on your 16-17 for the World Cup,” Agarkar said.

Jadeja, who last played an ODI in July 2017, has been recalled and Agarkar isn’t sure where he fits in the scheme of things. “Is the captain confident enough in flat conditions to bowl him 10 overs? I am not so sure. That’s the reason he went out of the team he wasn’t getting any wickets. It was a good opportunity to try Krunal because he’s definitely a better batsman. Jadeja has got the ability but you won’t bat him in top-six, in my opinion,” he said.

He also felt that India could have benefited from the experience of Umesh Yadav. ” I don’t know where Umesh Yadav is, he only played one Test in England. Siddarth Kaul and Deepak Chahar both look to me look like T20 selections,” Agarkar observed.

While Chahar replaces Pandya, Siddarth will take the place of Shardul. Both, as per Agarkar, aren’t like-for-like replacements but believes that the team management might have made the call keeping in mind the bowling conditions in mind.

“Hardik Pandya is a much better batsman Chahar is primarily a bowler. You have lost Shardul Thakur, an out and out seam bowler, and gone for Siddarth Kaul. Ideally, you would have gone for Umesh Yadav someone with more experience. Maybe they have seen the pitch conditions where you don’t need an extra pace. Maybe they need someone who can bowl straight so they went for Siddarth. India vs West Indies: Sale of tickets for Rajkot Test to commence from September 22 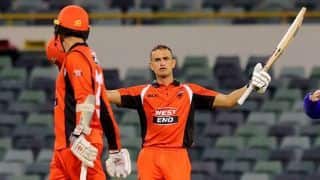