The BCCI has decided to give Kohli time off in view of the home series versus West Indies in October-November and the four-Test tour of Australia from December 6.

MSK Prasad, the BCCI s chief selector, has clarified the selection panel s decision to rest Virat Kohli for the 2018 Asia Cup in the UAE this month was taken keeping in mind the amount of cricket the Indian captain has played this summer and the challenges that lie ahead.

Since he returned to competitive cricket after a month s break, Kohli has played each game of India s tour of the UK, which has spanned five Twenty20 internationals, three ODIs and four Tests, including the ongoing Southampton match. While there were murmurs of pressure from the host broadcasters on Kohli to go to the UAE given the facelift his presence would give to this low-key tournament, the BCCI has decided to give him time off in view of the home series versus West Indies in October-November and the four-Test tour of Australia from December 6.

The fresh face in India s squad for the Asia Cup, which runs from September 15-28, was the uncapped Rajasthan pace bowler Khaleel Ahmed. The 20-year-old recently played in the Quadrangular trophy for India A where he picked up seven wickets in four matches, including 3/45 against South Africa A in Bengaluru. Prior to that, he played five List-A matches for India A in England and impressed with eight wickets.

On Khaleel s maiden selection to an Indian team, Prasad said: There are two-three slots we are yet to see before we fix the final team for the World Cup and one of the slots is a seamer slot which is available. We are looking at a left-hander option in Khaleel Ahmed. 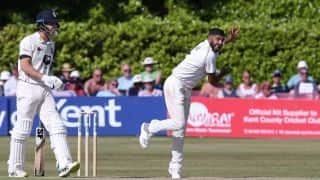