Ali hopes to make a mark in victory over India but stressed that his overall goal was to bowl Pakistan to the Asia Cup title.

Fast bowler Hasan Ali  is geared up for the India vs Pakistan clash in the 2018 Asia Cup, but insists that the team’s focus is on wining the tournament, and not just the much-awaited fixture on September 19.

“We are not only focused on the 19th September game against India but on the tournament as a whole,” said the 24-year-old in a press conference ahead of Pakistan’s departure for the UAE. “There is always a special enthusiasm when we play against India so hopefully we will keep the same going for the upcoming match against India as well. I am happy that there is pressure on me as it makes me perform better and help my team win.”

Ali was at the forefront of Pakistan’s title triumph in the ICC Champions Trophy in England last year, taking 13 wickets to be named Player of the Series and Bowler of the Series. In the team’s first match against India during the league phase, Pakistan were beaten by 124 runs with Ali taking 1/70 in ten overs. However, when the teams met in the final at The Oval on June 18, 2017 it was an entirely different result, with Pakistan crushing India by 180 runs. Ali took 3/19 in the final.

Looking at the September 19 match between India and Pakistan, Ali – who in 2017 became the fastest Pakistan bowler to 50 ODI wickets – was hoping to make a mark in a victory for his team but stressed that his overall goal was to bowl Pakistan to the Asia Cup title.

“I would like to do my wicket-taking celebration 10 times against India but lets see what happens; I will do my best to take wickets for my team and for my fans who want to see my wicket-taking celebrations,” he said. “Every bowler wants to take five wickets but my focus is to perform when my team needs me most. It doesn’t matter if that means taking one or three or four wickets; my focus is to take wickets for my team at that difficult time. I will try to take a five-for in the Asia Cup and to perform in a way such that Pakistan wins.”

India will be without Virat Kohli at the Asia Cup, with the BCCI opting to rest him keeping in mind a busy calendar ahead. Rohit Sharma will lead India in the UAE, which prompted a question to Ali about whether not having Kohli is an advantage for Pakistan.

“Yes, we may have an advantage as Virat Kohli pulls his team out of trouble when they are under pressure so a different player in his place may not be able to handle that pressure,” he said. “Virat is a great player and it’s every young bowler’s wish to take his wicket but he wont be here this time so that’s okay but if I face him next time, I will try and take his wicket.”

According to Ali, the fact that UAE has been Pakistan’s home base since the 2009 terror attacks on the touring Sri Lanka team gives them an edge over their opponents, as well the fact that India lost to Pakistan in the Champions Trophy final.

“We are on top of India as they will be under pressure as they lost the last match to us, these are conditions we are familiar with and we will do our best to avail such conditions to our advantage,” he said. “Both India and Sri Lanka are good sides; both are used to playing in such conditions. But we also play in UAE all the time and we know how to play cricket here. We all know that Virat Kohli is a good player and a match-winner but even without him the India team is very good.” 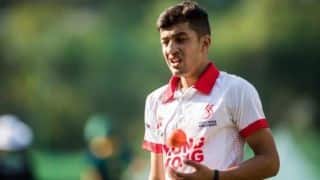 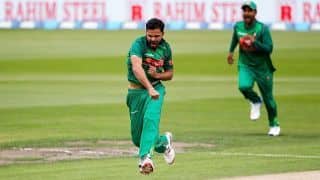