Pakistan began their Asia Cup 2018 campaign in style as they thrashed Hong Kong by eight wickets at the Dubai International Cricket Stadium on Sunday.

Pakistan began their Asia Cup 2018 campaign in style as they thrashed Hong Kong by eight wickets in a Group B match at the Dubai International Cricket Stadium on Sunday. Pakistan chased down a modest target of 117 in 23.4 overs with opener Imam-ul-Haq scoring an unbeaten half-century.

Pakistan looked in no hurry as they began their chase on a steady note with the opening pair of Fakhar Zaman and Imam adding 41 runs in eight overs. However, Zaman lost his focus to edge one from Ehsan Khan and was given out caught behind for 24.

Imam, though, was the beneficiary of a dubious decision when the third umpire adjudged not out after being referred for an not out lbw decision. The ball would have hit the stump but the umpire thought otherwise, handing the left-hander a lifeline on 24.

The 22-year-old capitalised on it and in the company of Babar Azam took Pakistan closer to the target. The duo raised a 52-run stand before Ehsan struck again to remove Azam on 33. Imam continued and went on to record his maiden ODI half-century he converted his all previous score of fifties into hundreds.

The pair of Kinchit Shah and Aizaz Khan built a partnership to dig their team out of a hole after they d lost half of their side inside 17 overs for 44 runs. They added 53 runs for the sixth wicket before being separated.

Left-arm pacer Usman Khan then hastened their collapse in the 31st over with three wickets in the space of five deliveries. He first broke through the defense of Aizaz to have him clean bowled on 27 and then trapped Scott McKechnie lbw for a two-ball duck. His final delivery of the over was an in-dipper and Tanwir Afzal (0) was left to ponder what had happened on his way back to the dressing room with his off stump rattled first-ball.

However, the 24-year-old pacer hobbled off the pitch midway through his eighth over which was completed by Fakhar Zaman. He later revealed the injury wasn’t anything to worry about.

But a poor response to what should have been a quick single and a direct-hit from Shadab Khan resulted in a long walk back for Nizakat to the pavilion on 13. Anshuman hit three fours in his 19 before a poor shot resulted in him being out caught behind.

Shadab Khan then bowled a flurry of googlies to leave Hong Kong in a spin. Two of those deliveries in his first over got him two wickets Babar Hayat stumped on 7 and Ehsan Khan lbw for a two-ball duck.

Hong Kong lost their final wicket in the same way as they lost their first to a run-out A big mix-up as Mohammad Nawaz scampered for a single but was sent back. However, before he could make his way back to safety, Sarfaraz Khan had picked up Hasan Ali s throw and removed the bails. Hong Kong innings lasted 37.1 overs.

Usman was the pick of the bowlers with figures of 3/19 while Ali and Shadab chipped in with two wickets each. 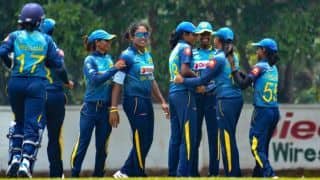