The last time India and Afghanistan faced each other in the Asia Cup was in 2014. India won that match by eight wickets.

After having shaken off the dust in a lacklustre performance against Hong Kong in their 2018 Asia Cup opener, India have mauled over their oppositions with huge defeats, including two massive victories over Pakistan.

Having sealed their place in the summit clash on Friday after two wins in the Super Four matches one over Bangladesh and Pakistan India face Afghanistan in their last Super Four match at the Dubai International Cricket Stadium on Tuesday.

After a last-over loss to Pakistan in their Super Four round, Afghanistan came agonisingly close to another win against Bangladesh, but were too close, yet too far for a win, and lost by three runs on Sunday.

Afghanistan will be itching to exit the tournament on a high, and a win against the No. 1 ODI team would do Asghar Afghan and Afghanistan cricket a lot to take the level of the sport forward. Meanwhile, Rohit Sharma and the Indian think tank would want to carry on with the wining momentum to ensure they enter the final with the same mood. It all depends which side gives it that extra push on the day.

Weather: Mostly sunny with a high of 38 degrees

Given that it s a dead rubber, India may want to test a feeble middle order. If Rohit wins the toss, he may opt to bat, a move that could give India 50 overs for all batsmen to spend some time in the middle. In the tournament, Rohit and Shikhar Dhawan have so far faced 284 and 321 balls respectively. The next best is Ambati Rayudu, who has played 162 balls. The pace duo of Jasprit Bumrah and Bhuvneshwar Kumar could be rested to reenergise for the final, given the soaring mercury levels in the dessert city. Two among Deepak Chahar, Siddarth Kaul and Khaleel Ahmed could take their spots in the playing XI.

Afghanistan may not want to tamper with the playing XI that almost won them their Super Four match against Bangladesh. It was just a matter of closing the situation. However, the form of opener Ihsanullah may come under the scanner. Barring the group opener against Sri Lanka when he scored 45, Ihsanullah has registered scores of 8,10 and 8 in the next three matches.

The last time India and Afghanistan faced each other in the Asia Cup was in 2014. India won that match by eight wickets. 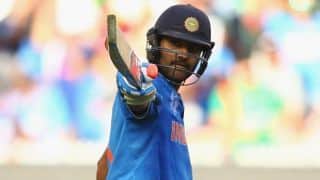