India face Bangladesh in game one of the Super Four in Dubai, having topped their group with wins over Hong Kong and Pakistan.

Former India captain Sunil Gavaskar has backed Kedar Jadhav to step up and fill the role of allrounder in the absence of the injured Hardik Pandya for the rest of the 2018 Asia Cup.

Pandya was ruled out of the tournament in the UAE with a back injury on Thursday, forcing the BCCI to call up Ravindra Jadeja on short notice, but with Jadhav taking four wickets in two games, of which 3/23 came in the win over Pakistan on Wednesday, Gavaskar felt that India had a very good option already in the XI.

“Kedar Jadhav has shown he can fulfil the allrounder’s role, like he did in the game against Pakistan as well as Hong Kong,” wrote Gavaskar in today’s Times of India. “Whether the opposition underrated his bowling or they get mesmerised by his various delivery points, he does a sterling job for his team and gives the extra option to the captain in case one of the main bowlers is having a hard day.”

India face Bangladesh in game one of the Super Four in Dubai today, having topped their group with wins over Hong Kong and Pakistan.

“India will be mighty pleased with the return to form of Shikhar Dhawan and Rohit Sharma. Getting off to a flying start makes the journey towards a big score eminently easier,” wrote Gavaskar. “[Ambati] Rayudu is looking in good touch too and his direct hit run-out of Shoaib Malik ensured Pakistan did not have a late flourish. Over the last year or so the Indian bowling attack has taken centre-stage and has shown its capability of picking wickets in any conditions. Their efforts in the desert heat too have been heartwarming.” 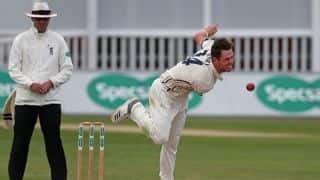