Ravindra Jadeja marked his return to ODIs in style picking up 4/29 before captain Rohit Sharma struck a second straight fifty to lead India to an easy eight-wicket win.

Ravindra Jadeja marked his return to ODIs in style picking up 4/29 before captain Rohit Sharma struck a second straight fifty to lead India to an easy seven-wicket win against Bangladesh in Match 1 of the Super Four stage of Asia Cup 2018 on Friday.

At the toss, Rohit had mentioned how he knew batting under lights would be easier and so he opted to field after winning the toss. As it would turn out, he was on point. Similar to how Pakistan folded against India earlier in the week, Bangladesh, too struggled in the Dubai heat.

Them being bowled out for a low total was a result of some brilliant bowling from Jadeja and a couple of rash strokes from set batsmen. India, though, were clinical in their chase as the opening pair of Rohit and Shikhar Dhawan added 61 runs. Dhawan though would have felt disappointed having thrown away a start that saw him hitting four fours and a six in his 40. He was pinned in front by Shakib while attempting a sweep. Ambati Rayudu also fell early after edging one from Rubel Hossain to the ‘keeper on 13.

Rohit, who opened his account with a four in the first over, took the backseat as Dhawan began playing his shots. However, after Dhawan departed, he opened up, smoking a six off Shakib Al Hasan and then hitting two fours in the final over of Mehidy Hasan who earlier top-scored with 42 to revive Bangladesh innings.

Rohit took a liking to Shakib as he smacked him again for a second six which took him to his half-century and he repeated the feat again in the left-armer’s next over. After Rayudu’s dismissal, MS Dhoni was promoted up the order and with Rohit, added 64 runs for the third wicket before holing out on 33 in search of a biggie as India needed just four to win.

While Indian openers laid a solid platform, Bangladesh lost their openers inside six overs with Bhuvneshwar Kumar (3/32) and Jasprit Bumrah (3/37) landing early blows. Liton Das miscued a pull to be caught on 7, off Bhuvneshwar while Nazmul Hossain was caught in the slips off Bumrah for the same score.

Shakib looked good as he drove Bumrah for a four through covers to open his account. He welcomed Jadeja with consecutive fours through covers and to square leg region. But he ended up playing one shot too many as in his effort to cream a third successive four, ended up sweeping into the hands of Dhawan at square leg to hole out on 17. That wicket was, though, thanks to the tactical genius of Dhoni. Having seen Shakib clatter successive fours off Jadeja, Dhoni asked Rohit to remove Dhawan from the slip region and station him at square leg. And voila, India were celebrating a wicket next ball.

Mohammed Mithun reviewed an lbw decision but the decision was upheld and he became Jadeja’s second victim. Mushfiqur Rahim started well, following up on his century in the tournament opener against Sri Lanka. But like Shakib, he too threw away the start and reverse-swept one from Jadeja straight to short fine-leg to depart on 21.

Bangladesh were reeling at 65/5 in 18 overs when Mahmudullah and Mosaddek Hossain got together. They took the slow route to lead recovery, avoiding a repetition of rash strokes which cost their predecessors dearly.

They took the score past the 100-run mark when a stroke of luck again shifted the momentum. Bhuvneshwar, returning for a second spell, trapped Mahmudullah in front and the umpire failed to spot an inside edge to raise the finger. The batsman, unaware of Bangladesh having used the lone review, asked for a referral only to leave the field disappointed on 25. His partner Mosaddek followed him to the dressing room soon as Jadeja had him feathering an edge to the wicketkeeper on 12.

With their team on the danger of being bowled out for a low total, Mehidy Hasan and captain Mashrafe Mortaza took over the reins and ensured Bangladesh innings doesn’t end in a hurry. Hasan settled nerves with two fours off Bumrah in one over and after a quiet period, brought the crowd to their feet with the first six of the match off Yuzvendra Chahal. He added another six to his tally with the innings entering the final 10 overs. A single took them to 150 and Mortaza then showed his power with two sixes over long-on and long-off off successive Bhuvneshwar deliveries.

However, just when it looked Bangladesh will be able to cross 200, India hit back with quick blows. Mortaza, after having clubbed two sixes, ended up guiding a low full toss from Bhuvneshwar into the hands of short fine leg on 26. Mehidy Hasan was then undone by a slower one from Bumrah in the following over to be caught on 42.

Bumrah then removed the last man Mustafizur Rahman – off the first delivery of the 50th over to finish with figures of 3/37. Rohit later made a short work of the target hitting five fours and three sixes.

Saturday is a rest day after which India will face Afghanistan while Bangladesh face Pakistan on Sunday. 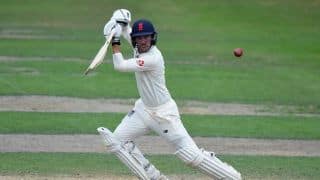 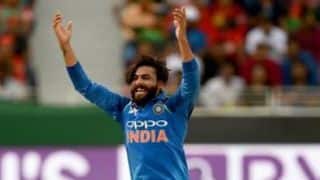 I wanted to leave a mark on ODI return: Ravindra Jadeja