Mushfiqur Rahim was the architect of Bangladesh's only seventh win against Sri Lanka in 45 ODIs as they began their Asia Cup 2018 campaign in style.

Mushfiqur Rahim was the architect of Bangladesh’s only seventh win against Sri Lanka in 45 ODIs as they began their Asia Cup 2018 campaign in style with an all-round show in the tournament opener on Saturday. Mushfiqur recorded his sixth ODI century and by the time he walked back as the final Bangladesh wicket to fall, he had scored 144 his highest score in the format.

That the 31-year-old Mushfiqur was able to surpass his previous best of 117 was thanks, in part, to Tamim Iqbal who suffered a fractured wrist having copped a blow earlier in the Bangladesh innings that rendered him unfit to bat. He retired hurt on two.

However, when Mustafizur was run out leaving Bangladesh nine wickets down, effectively all out, out came Tamim with a heavily strapped left hand. He took guard to face the final delivery of the 47th over and bizarrely, batted with just one hand.

Watching his teammate inspired Mushfiqur as he clobbered 32 runs off 14 deliveries to push Bangladesh to 262 before holing out off the third delivery of the final over.

“Thanks to almighty for giving me strength,” Mushfiqur said at the post-match presentation. “We need to win both our games to qualify for the next round. Mithun plays really well and I knew it was easy to bat and I took my chances.”

He further added, “When I saw Tamim walk out to bat I knew I had to do something for him and for my country. It’s difficult to concentrate each and every ball. I thought I’ve been in great nick in the last one year and I was determined to score big runs in this tournament. I’m really happy that I’m able to contribute to my team’s win.”

Sri Lanka’s chase never took off as they kept losing wickets regularly. They were bowled out for just 124 in 35.2 overs as Bangladesh won by 137 runs their first ODI win in UAE. 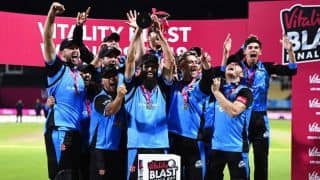