As India aim for a place in the final, getting there will be easier said than done with a wounded Pakistan awaiting them in the Super 4 match on the Asia Cup.

With three wins in three matches, Rohit Sharma‘s India is the only team in the Asia Cup to remain unbeaten. The Hong Kong game aside, India have been emphatic in the series, winning games against Pakistan and Bangladesh by comprehensive margins, and are currently the favourites to go all the way.

However, as India aim for a place in the final, getting there is easier said than done, as a wounded Pakistan await them for what promises to be a bumper Sunday clash. As the two teams prepare to lock horns for the second time in the series, expect Pakistan to brush aside the one-sided result of September 19 and come out firing on all cylinders. India, on the other hand, would be hoping for a repeat of what transformed on Wednesday.

If history is any indication, India cannot afford to take Pakistan lightly. The last time they did, India were walloped by their arch-rivals in the final of the ICC Champions Trophy. Based on form alone, you d hand India a psychological edge. Having gone down to them by eight wickets and narrowly avoiding an upset at the hands of Afghanistan on Friday, it is certain that Pakistan have work to do. But unpredictability has been their forte and India would surely be wary of that.

Weather: Mostly sunny with a high of 40 degrees

Hardik Pandya‘s injury has proven to be a blessing in disguise for India, with his replacement Ravindra Jadeja straightaway leaving an impact with figures of 4/29. India are well settled with their five-bowler theory as the results have shown, Bhuvneshwar Kumar and Jasprit Bumrah opening the attack and the spin department relying on Yuzvendra Chahal, Kuldeep Yadav and Jadeja. Add to that the golden arm of Kedar Jadhav and India have enough to trouble the Pakistan batsmen.

Their struggles against quality spin was evident in the previous tie between the two teams, and with three wins in three matches, India have no reasons to tinker with their Playing XI. That said, they might want to try out KL Rahul ahead of Dinesh Karthik keeping one eye on the final, but it isn’t an urgent need.

Pakistan handed a debut to Shaheen Afridi ahead of Mohammad Amir, but despite an unlucky outing, the 18-year-old looked threatening and created more chances ahead than the one he replaced. That itself is a good enough reason to persist with Afridi considering the ineffectiveness of Amir. Pakistan’s biggest concern will be the uncertainty regarding spinner Shadab Khan. If he recovers, Shadab becomes a like-for-like replacement for Mohammad Nawaz. Fakhar Zaman is coming off consecutive ducks, which may lead to some reshuffling of the top order. 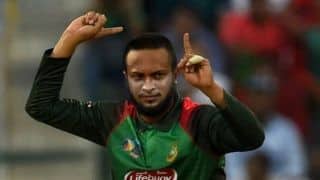 Bangladesh are better than Afghanistan, no reason why we can't bounce back: Shakib Al Hasan