Dhoni pointed out that there were a few things that played a role in India s failure to get over the line.

Afghanistan tied with India
Man of the Match: Mohammad Shahzad

MS Dhoni, who returned to captain India for their game against Afghanistan, rued the bowlers inability to extract swing in the opening overs.

Afghanistan snatched an epic tie against India in the Super four game of the Asia Cup in which Rashid Khan denied India seven runs in the final over. But the base was formed by centurion Mohammad Shahzad, who launched an assault on the Indian pace trio of Khaleel Ahmed, Siddharth Kaul and debutant Deepak Chahar, and played a key role behind Afghanistan posting 252/8.

All three bowlers were dealt a hammering by Shahzad. Dhoni, while giving the credit to the batsman, pointed out that there were a few things that played a role in India s failure to get over the line.

I wouldn’t say we went wrong in the chase. To start off, it was like a handicap in golf, Dhoni said during the post-match presentation. We didn’t go with a full-strength side. There was not enough spin on this wicket either. The first over that a fast bowler bowls, they need to extract swing. We didn’t hit the back of a length area, and we gave away too much initially with the ball.

India started their chase briskly with KL Rahul and Ambati Rayudu posting 110 in 17 overs. But Afghanistan fought back post the wicket of Rayudu and continued to chip away. The fact that Dhoni and Dinesh Karthik were fell victim to poor umpiring LBWs didn t help India s cause either.

We got off to a very good start with the bat, but the wicket slowed down over the course of the game, so someone should have continued with the bat, said Dhoni. Shot-selection is something that we need to work on. There were a couple of run-outs, and a few things we can’t talk about (the incorrect LBW decisions) because I don’t want to get fined for it.

That said, Dhoni did not shy away from complimenting Afghanistan for their brand of cricket.

“Their (Afghanistan’s) cricket has improved a lot. The way they have continued from the start of the Asia cup, it is commendable and we have enjoyed their cricket,” Dhoni said. “It is one country that has risen through the ranks very well. They played really well. They batted extremely well too. The wicket slowed down later, but they bowled extremely well throughout the game and their fielding was tight too.

“It’s good that it’s a tie, but they played really well. The Afghanistan guys played really well. 250 was a very good score on this wicket. We could have been on the losing side because of quite a few things that didn’t go for us, so I’m happy with the result.” 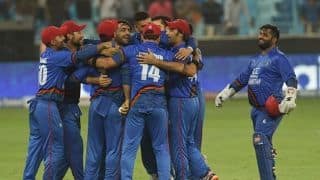