Bangladesh defeated Afghanistan for the first time in the Asia Cup in three matches and kept their hopes of a place in the final alive.

Against Pakistan, it was the experience of Shoaib Malik that denied Afghanistan a much deserved win on Friday and on Sunday, they were undone by the wily Mustafizur Rahman, who defended eight runs in the final over. Mustafizur gave away just four runs, as Bangladesh beat Afghanistan by three runs in Match 4 of the Super Four of the 2018 Asia Cup at the Sheikh Zayed Stadium, Abu Dhabi.

Veteran Mohammad Nabi took his team close scoring 38 off 28, while Samiullah Shenwari made 23 of 19, but couldn’t figure out Mustafizur’s variations in the final over.

For Bangladesh, they defeated Afghanistan for the first time in the Asia Cup in three matches and kept their hopes of a place in the final alive.

Middle-order Hashmatullah Shahidi had anchored the chase with his third straight fifty plus score with stands of 66 runs with Mohammad Shahzad (53) for the third wicket and then 68 runs for the fourth wicket with his skipper Asghar Afghan (39) but got out with seven overs remaining. He made a valiant 71 to follow up his previous scores of 97* and 58.

Bangladesh had a good start to their defence of the total with Mustafizur removing opener Ihsanullah Janat for eight in the fifth over before one down batsman Rahmat Shah was run out for one by Shakib al Hasan, and that left Afghanistan in a spot of bother at 26 for two. Shahzad then put his head down and worked his way to his 13th ODI fifty. His knock came off 81 deliveries with the help of eight boundaries. He was picked by Mahmudullah. Afghan departed in the 40th over to Mortaza.

However, once Shahidi was removed, bowled, in the 44th over while attempting a lap shot of Mashrafe Mortaza, Bangladesh edged ahead; but only momentarily as Nabi then took over and soaked in the pressure.

With 31 needed off 18, Afghanistan took 12 of the 48th over bowled by Mustafizur, followed by 11 off Shakib – the 49th, but lost Nabi. And with eight off six to win, Rahman removed Rashid Khan off the second ball followed by one, dot, one and dot to seal a close win.

Earlier, Mahmudullah and a returning Imrul Kayes their heads down to tough it out in searing heat to help Bangladesh to a respectable total after the top-order once again faltered.

Opting to bat first, Bangladesh lost opener Nazmul Hossain Shanto for six in the fifth over before new ball bowler Mujeeb ur Rahman had Mohammad Mithun (1) trapped in front in the next over.

Liton Das, the other opener, looked good and made 41 off 43 before he became Rahis Khan’s victim in his very first over. However, in company of Mushfiqur Rahim (33), Das had taken Bangladesh to a 81 runs in the 19th over, setting up a good platform for the middle-order to consolidate.

However, that was not to be as Bangladesh were dented with two quick wickets of Shakib Al Hasan (0) and Rahim. Bangladesh had lost three wickets for just six runs and were starting down the barrel at 87 for five.

Mahmudullah and Kayes, drafted into the squad just two days ago and playing in place of allrounder Mosaddek Hossain, put their hands up and negotiated a tough spell from Rashid and Mohammad Nabi to rebuild the Bangladesh innings.

The duo put on 128 runs in 26.3 overs. Mahmudullah was the aggressor and compiled his 16th ODI fifty, while Kayes, 31, playing his first ODI since October, 2017 made the most of his his recall and went on to add an unbeaten 72 off 89 balls – his 5th ODI fifty.

Mahmudullah departed for 74 off 81 balls to Alam as Afghanistan managed to restrict Bangladesh in the last five overs, ending with 249 for seven. I played sensibly, didn’t want to throw it away: Shikhar Dhawan 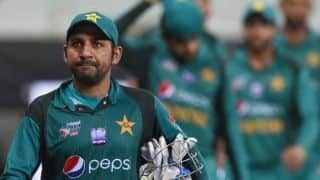