Hong Kong will play UAE in the final of the 2018 Asia Cup Qualifiers, on September 6. The day started with Oman on eight points, UAE on seven, and Hong Kong on six. There was only one way Oman could have been eliminated, and that was precisely what happened: Hong Kong beat Nepal to gain two points; UAE beat Oman to get their two points; and Hong Kong (+1.530) finished with a net run rate better than Oman’s +0.583.

Anshuman Rath (52) defied Sandeep Lamichhane (10-2-27-5) as Nepal ended their miserable campaign with a defeat, against Hong Kong at UKM-YSD Cricket Oval, Bangi. To their credit, Nepal fought hard after being bowled out by 95. Lamichhane took out the first two wickets while Sagar Pun claimed Nizakat Khan, and Hong Kong were suddenly 40 for 3.

But Rath took control, with some support from Kinchit Shah (11), the only other Hong Kong batsman to reach double-figures. Lamichhane kept striking, removing both batsmen. Even then Hong Kong needed a mere 13, but Basant Regmi had Aizaz Khan stumped, while Ehsan Khan became Lamichhane’s fifth wicket.

There were still nine more to be scored, but with Lamichhane bowling out, Scott McKechnie and Tanwir Afzal saw Hong Kong through. This win also put Hong Kong in the final of the tournament.

The Omanis, undefeated in the tournament till today, did another fantastic job, at Bayuemas Oval, Kuala Lumpur today. Not a single UAE partnership made it past 30 as they posted 208 for 8.

At Kinrara Academy Oval, Kuala Lumpur, Singapore pulled off their first win of the tournament, against hosts Malaysia. A 95-ball 100 from Anish Paraam first took Singapore to 276 for 9. Shafiq Sharif (93) and Ahmed Faiz (59) added 142 for the second wicket, but Malaysia could not keep up with the mounting asking rate. Amjad Mahboob finished with 5 for 59. 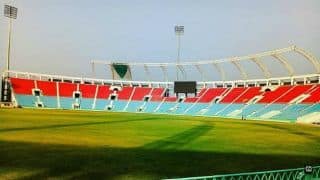