Kuldeep, Chahal, and Khaleel picked up three wickets each to seal the win, after Dhawan's 14th ODI century had taken India to 285/7.

Hong Kong came up with one of the most inspiring performances by an Associate team, but it wasn t enough to prevent India from registering a 26-run win in their Asia Cup opener. Chasing 286, openers Nizakat Khan and skipper Anshuman Rath set the platform with a record 174-run stand for the opening wicket, one which seemed to blow the wind out of India’s sails.

However, the pressure of a steep asking rate, coupled by Hong Kong s inexperience at the top level allowed the Indian bowlers to chip away with wickets. Legspinner Yuzvendra Chahal and debutant Khaleel Ahmed picked up three each to seal the win, after Shikhar Dhawan’s 14th ODI century had taken India to 285/7.

India had to wait for 34 overs before breaking through. Against all expectations, the opening wicket partnership of Rath and Nizakat put on 63 runs more than the entire team did against Pakistan. Despite Rath struggling to get going initially, Nizakat was positive in his approach and struck five boundaries to take Hong Kong past 50 in the 10th over. A rusty-looking Bhuvneshwar Kumar was taken for 29 in his first spell of six overs, with Khaleel proving equally ineffective.

Hong Kong’s brazen start put India under the pump straightaway. Shardul Thakur overstepped thrice in the 12th over that fetched 17 runs. Nizakat was exemplary against the medium pacers, scoring at over a run-a-ball and reaching his half-century with a six over midwicket.

India introduced Chahal and Kuldeep Yadav, and the runs started drying up. Hong Kong went almost 11 overs without a boundary before once again Shardul conceded 13 runs in his second spell. Still, Hong Kong were stuck at 139 around the 30-over mark. Chahal and Kuldeep’s discipline opened the gate for India’s comeback. The pressure mounted and the batsmen were compelled to play unorthodox shot. There was a period during which Kuldeep gave away just one runs in 12 balls.

A wicket is all India needed and Kuldeep provided the first breakthrough with Rath driving straight to cover. And the wheels came off. Nizakat became Khaleel’s first international wicket as Hong Kong slipped from 174/1 to 228/6. Babar Hayat struck couple of sixes but the effort just wasn’t enough. Despite coming close, take nothing away from the fact that Hong Kong showed character throughout the match. It was evident from the first half, when they pulled things back in the final overs of the Indian innings.

Dhawan put behind the horrors of a forgettable England tour with fine century, and aided by a half-century by Ambati Rayudu, set India up for a massive total. But from 240/2 in 40.3 overs, India lost the plot post Dhawan s dismissal. In the next two overs, Hong Kong chipped away with the wickets of MS Dhoni and Dinesh Karthik – Dhoni out leg before without scoring and Karthik missing out to convert a start. Between overs 40 and 50, Hong Kong conceded just 48 runs, and despite Kedar Jadhav holding fort at one end, India failed to breach the 300-run margin, a total that looked very much within reach at a time Dhawan and Rayudu were batting.

India were motoring along with the two batsmen putting 116 runs for the second wicket. They did extremely well to deal with the slow nature of the surface, especially after Rohit Sharma had departed early for 23. Dhawan took his time before playing his shots, so did Rayudu. Once they went past the 20-over mark, out came the shots.

Dhawan was back at his flamboyant best striking the ball all around the wicket. He played the sweep with a lot of authority, and was severe on the spinners by dancing down the wicket and taking them for runs in the V. It was fittingly the sweep towards deep extra cover that brought up his three-figure score. With Dhawan keeping the scoreboard ticking, Rayudu was comfortable biding his time, although he identified the loose deliveries on offer to hammer two sixes off Nadeem Ahmed and Ehsan Khan. He brought up his seventh half-century before feathering one to the wicketkeeper.

His dismissal however had no bearing on the scoring rate with Dhawan and Karthik forging a 79-run stand. Dhawan went into overdrive post his century but his bid to up the scoring led to his dismissal. That is when Hong Kong pulled things back. 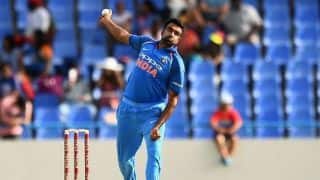 I didn’t do too much wrong to be left out of India’s limited-over plans: Ravichandran Ashwin We were in a position to win against India and probably should have: Hong Kong captain Anshuman Rath